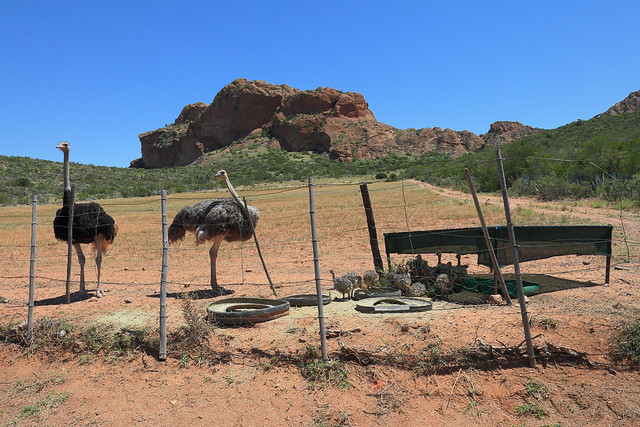 The Karoo (/kəˈruː/ kə-ROO; from a Khoikhoi word, possibly garo "desert") is a semi-desert natural region of South Africa. There is no exact definition of what constitutes the Karoo, and therefore its extent is also not precisely defined. The Karoo is partly defined by its topography, geology and climate — above all, its low rainfall, arid air, cloudless skies, and extremes of heat and cold. The Karoo also hosted a well-preserved ecosystem hundreds of million years ago which is now represented by many fossils.

The Karoo is sharply divided into the Great Karoo and the Little Karoo by the Swartberg Mountain Range, which runs east-west, parallel to the southern coastline, but is separated from the sea by another east-west range called the Outeniqua –Langeberg Mountains. The Great Karoo lies to the north of the Swartberg range; the Little Karoo is to the south of it.

The Little Karoo is separated from the Great Karoo by the Swartberg Mountain range. Geographically, it is a 290 km long valley, only 40–60 km wide, formed by two parallel Cape Fold Mountain ranges, the Swartberg to the north, and the continuous Langeberg-Outeniqua range to the south. The northern strip of the valley, within 10–20 km from the foot of the Swartberg mountains is most un-karoo-like, in that it is a well watered area both from the rain, and the many streams that cascade down the mountain, or through narrow defiles in the Swartberg from the Great Karoo. The main towns of the region are situated along this northern strip of the Little Karoo: Montagu, Barrydale, Ladismith, Calitzdorp, Oudtshoorn and De Rust, as well as such well-known mission stations such as Zoar, Amalienstein, and Dysselsdorp.

The Little Karoo can only be accessed by road through the narrow defiles cut through the surrounding Cape Fold Mountains by ancient, but still flowing rivers. A few roads traverse the mountains over passes, the most famous and impressive of which is the Swartberg Pass between Oudtshoorn in the Little Karoo and Prince Albert on the other side of the Swartberg mountains in the Great Karoo. There is also the main road between Oudtshoorn and George, on the coastal plain, that crosses the mountains to the south via the Outeniqua Pass. The only exit from the Little Karoo that does not involve crossing a mountain range is through the 150 km long, narrow Langkloof valley between Uniondale and Humansdorp, near Plettenberg Bay.

The common ostrich (Struthio camelus), or simply ostrich, is a species of flightless bird native to certain large areas of Africa and is the largest living bird. It is one of two extant species of ostriches, the only living members of the genus Struthio in the ratite order of birds. The other is the Somali ostrich (Struthio molybdophanes), which was recognized as a distinct species by BirdLife International in 2014 having been previously considered a very distinctive subspecies of ostrich.

The common ostrich belongs to the order Struthioniformes. Struthioniformes previously contained all the ratites, such as the kiwis, emus, rheas, and cassowaries. However, recent genetic analysis has found that the group is not monophyletic, as it is paraphyletic with respect to the tinamous, so the ostriches are now classified as the only members of the order. Phylogenetic studies have shown that it is the sister group to all other members of Palaeognathae and thus the flighted tinamous are the sister group to the extinct moa. It is distinctive in its appearance, with a long neck and legs, and can run for a long time at a speed of 55 km/h (34 mph) with short bursts up to about 70 km/h (43 mph), the fastest land speed of any bird. The common ostrich is the largest living species of bird and lays the largest eggs of any living bird (the extinct elephant birds of Madagascar and the giant moa of New Zealand laid larger eggs).

The common ostrich's diet consists mainly of plant matter, though it also eats invertebrates and small reptiles. It lives in nomadic groups of 5 to 50 birds. When threatened, the ostrich will either hide itself by lying flat against the ground or run away. If cornered, it can attack with a kick of its powerful legs. Mating patterns differ by geographical region, but territorial males fight for a harem of two to seven females.

The common ostrich is farmed around the world, particularly for its feathers, which are decorative and are also used as feather dusters. Its skin is used for leather products and its meat is marketed commercially, with its leanness a common marketing point.

The feathers of adult males are mostly black, with white primaries and a white tail. However, the tail of one subspecies is buff. Females and young males are grayish-brown and white. The head and neck of both male and female ostriches is nearly bare, with a thin layer of down. The skin of the female's neck and thighs is pinkish gray, while the male's is gray or pink dependent on subspecies.

The long neck and legs keep their head up to 2.8 m (9 ft) above the ground, and their eyes are said to be the largest of any land vertebrate – 50 mm (2.0 in) in diameter – helping them to see predators at a great distance. The eyes are shaded from sunlight from above. However, the head and bill are relatively small for the birds' huge size, with the bill measuring 12 to 14.3 cm (4.7 to 5.6 in).

Their skin varies in color depending on the subspecies, with some having light or dark gray skin and others having pinkish or even reddish skin. The strong legs of the common ostrich are unfeathered and show bare skin, with the tarsus (the lowest upright part of the leg) being covered in scales: red in the male, black in the female. The tarsus of the common ostrich is the largest of any living bird, measuring 39 to 53 cm (15 to 21 in) in length. The bird has just two toes on each foot (most birds have four), with the nail on the larger, inner toe resembling a hoof. The outer toe has no nail. The reduced number of toes is an adaptation that appears to aid in running, useful for getting away from predators. Common ostriches can run at a speed over 70 km/h (43 mph) and can cover 3 to 5 m (9.8 to 16.4 ft) in a single stride. The wings reach a span of about 2 metres (6 ft 7 in), and the wing chord measurement of 90 cm (35 in) is around the same size as for the largest flying birds.

The feathers lack the tiny hooks that lock together the smooth external feathers of flying birds, and so are soft and fluffy and serve as insulation. Common ostriches can tolerate a wide range of temperatures. In much of their habitat, temperatures vary as much as 40 °C (72 °F) between night and day. Their temperature control relies in part on behavioral thermoregulation. For example, they use their wings to cover the naked skin of the upper legs and flanks to conserve heat, or leave these areas bare to release heat. The wings also function as stabilizers to give better maneuverability when running. Tests have shown that the wings are actively involved in rapid braking, turning, and zigzag maneuvers. They have 50–60 tail feathers, and their wings have 16 primary, four alular, and 20–23 secondary feathers.

The common ostrich's sternum is flat, lacking the keel to which wing muscles attach in flying birds. The beak is flat and broad, with a rounded tip. Like all ratites, the ostrich has no crop, and it also lacks a gallbladder. They have three stomachs, and the caecum is 71 cm (28 in) long. Unlike all other living birds, the common ostrich secretes urine separately from feces. All other birds store the urine and feces combined in the coprodeum, but the ostrich stores the feces in the terminal rectum. They also have unique pubic bones that are fused to hold their gut. Unlike most birds, the males have a copulatory organ, which is retractable and 20 cm (8 in) long. Their palate differs from other ratites in that the sphenoid and palatal bones are unconnected.

Research conducted by the Birbal Sahni Institute of Palaeobotany in India found molecular evidence that ostriches lived in India 25,000 years ago. DNA tests on fossilized eggshells recovered from eight archaeological sites in the states of Rajasthan, Gujarat and Madhya Pradesh found 92% genetic similarity between the eggshells and the North African ostrich, so these could have been fairly distant relatives.

Ostriches are farmed in Australia. Many escaped, however, and feral ostriches now roam the Australian outback.

Common ostriches normally spend the winter months in pairs or alone. Only 16 percent of common ostrich sightings were of more than two birds. During breeding season and sometimes during extreme rainless periods ostriches live in nomadic groups of five to 100 birds (led by a top hen) that often travel together with other grazing animals, such as zebras or antelopes. Ostriches are diurnal, but may be active on moonlit nights. They are most active early and late in the day. The male common ostrich territory is between 2 and 20 km2 (0.77 and 7.72 sq mi).

With their acute eyesight and hearing, common ostriches can sense predators such as lions from far away. When being pursued by a predator, they have been known to reach speeds in excess of 70 km/h (43 mph) and can maintain a steady speed of 50 km/h (31 mph), which makes the common ostrich the world's fastest two-legged animal. When lying down and hiding from predators, the birds lay their heads and necks flat on the ground, making them appear like a mound of earth from a distance, aided by the heat haze in their hot, dry habitat.

When threatened, common ostriches run away, but they can cause serious injury and death with kicks from their powerful legs. Their legs can only kick forward. 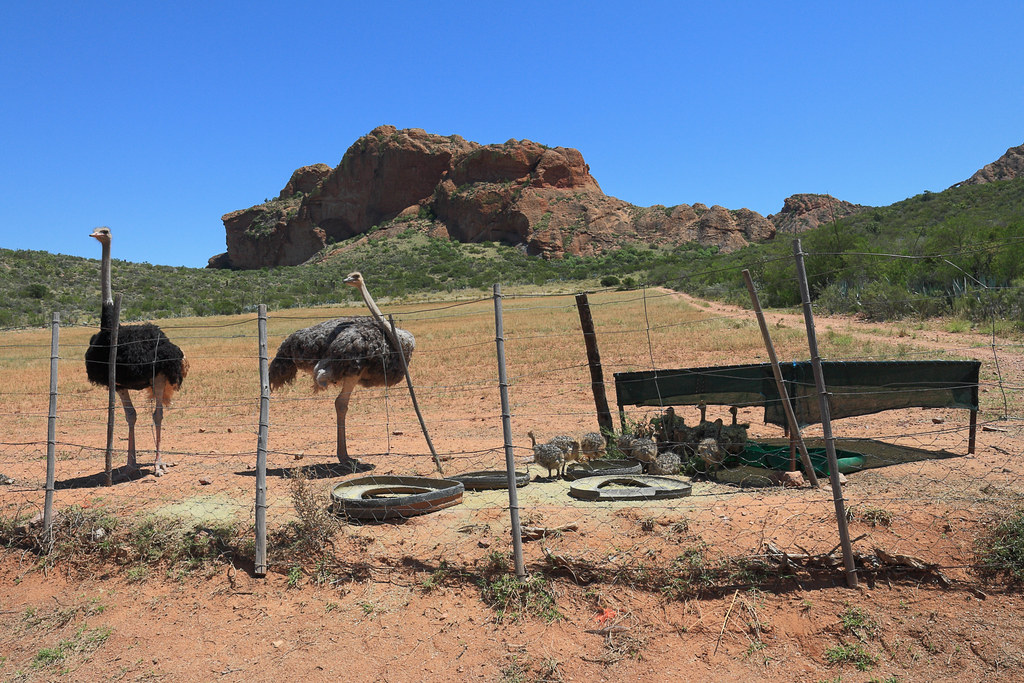