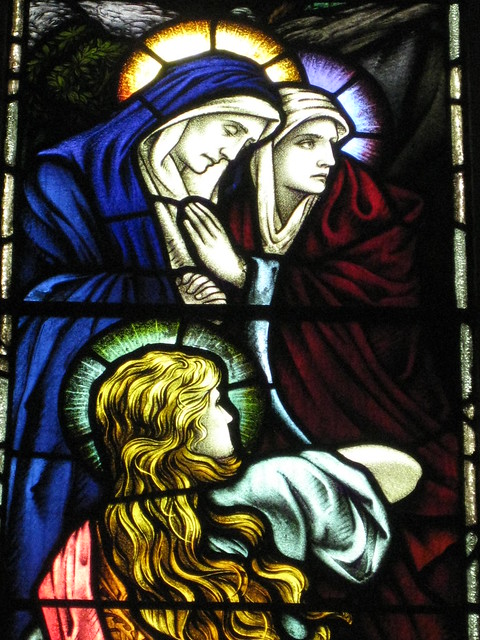 Detail of the Thomas and Agnes Clerke Memorial Window; The Former Saint George's Presbyterian Church - Corner Latrobe Terrace and Ryrie Street, Geelong
Installed on the norther nave of the former Saint George's Presbyterian Church, the Thomas and Agnes Clerke stained glass memorial window was commissioned by their daughter Florence in 1935. I believe the window was designed by Brooks, Robinson and Company Glass Merchants.
The window features the three Marys at the tomb of Jesus where they were met by an angel of the Lord who told them "He is not here, he has risen", which appears in the Gospel of Matthew from the King James Bible. This line from the bible is quoted at the bottom of the main panels above the dedication panels. The three Marys appear in the left-hand mail panel, with Mary Magdalene identifiable by her loose tresses. Mary, Jesus' Mother is wearing a blue robe. Appearing in the right-hand panel, the angel points to the empty tomb to indicate where Jesus has gone. The crown of thorns he wore sits, discarded, on the edge of the tomb. The quatrefoil of the stained glass window features the letters TAC, which I believe stands for Thomas and Agnes Clerke.

I could not find any information on Thomas or Agnes Clerke.

Rising proudly on the rise of a hill, the former Saint George’s Presbyterian Church, which stands on the corner of Latrobe Terrace and Ryrie Street on the outskirts of the Geelong central business district, began its construction in 1860. Designed by architect Nathaniel Billing in Victorian English Gothic style, the original large nave of the church, with vestry and apse were constructed of irregularly coursed basalt with Hawksbury River freestone dressings. The initial build was erected and completed in 1861 by contractors Brown and Gibson. The foundation stone was laid on 12 June 1861. The large and finely constructed church reflects the wealth of many of the church's foundation patrons, which included Francis Ormond and other Western District Squatters. The former Saint George’s Presbyterian Church is a significant and intact work of Nathaniel Billing, who was well known for ecclesiastical architecture. The original church was expanded with the addition of transepts in 1908, and finally a spire and tower in 1936. The tower and spire were donated as a seventy-fifth anniversary gift by wealthy parishioners James McPhillimy and his sister Louise. The McPhillimy family were not only wealthy parisioners, but were also long time worshipers at Saint George’s Persbyterian Church. They began worshiping there in 1886.

The inside of the former Saint George’s Presbyterian Church is quite plain, with white painted walls and three rows of blackwood pews separated by two aisles. The church features examples of its original latticed quarry glass lancet windows with one band of coloured glass, as well as several figurative stained glass windows installed later. This includes two pairs of lancet windows manufactured by Ballantyne and Company of Edinburgh, which are perhaps the church’s most beautiful windows for their wonderful colours and beautiful hand-painted details. There is also two windows by Melbourne stained glass manufacturers Brooks Robinson and Company installed in the 1930s, and a fine heritage listed stained glass window by one of Melbourne’s leading stained glass artists, William Montgomery, which commemorates the fallen of the Great War. The church’s rose window and great western window created by Melbourne stained glass manufacturer Ferguson and Urie are the oldest windows, and like the quarry glass windows, are original.

Saint George's Presbyterian Church was forced to close its doors in 2015 owing to dwindling congregation numbers, and whilst the Presbyterian Church still owns the church and manse, the manse is now rented out and has been used for both commercial and residential purposes. The church itself sits idly, its slowly weathering exterior requiring significant restoration, its garden sinking into neglect and its interior lying beneath a sheet of thick dust.

I am very grateful to the retired Presbyterian Reverend Andrew Bray, caretaker of the church at the time of photographing, for giving me an hour of his time and for letting me photograph the interior and stained glass windows so extensively.

Nathaniel Billing was born in Brightwell, Oxfordshire in 1821. Articled to the prestigious office of Sir Gilbert Scott in London, he later commenced his own architectural practice in Slough under his own name. Nathaniel married his first wife, Henrietta in 1850. Three years later the pair and their family immigrated to Australia. he was appointed to the Colonial Architect's Office in Belfast (now known as Port Fairy), but commenced his own practice there in 1855. In Port Fairy he designed Saint John's Church of England in 1856 and the Bank of Australasia in 1857. That same year, Nathaniel left Port Fairy and moved to Melbourne, where he soon had a thriving practice. In Melbourne, most of his commissions were ecclesiastical. He designed All Saints Church of England on Chapel Street in 1861 which with a seating capacity of 1,500 is the largest Church of England in the southern hemisphere, Saint Margaret's Church of England in Eltham in 1861, alterations to Melville House in Collins Street in 1881, "Steamshall" a Victorian Italianate villa in Kew in 1882, Saint Paul's Cathedral in Sale in 1884, Saint Matthias' Church of England in Richmond in 1885, the Fitzroy Cricket Ground grandstand in 1888, and extensions to Saint George's Church of England in 1889 in conjunction with the architects firm Dalton and Gibbons. Nathaniel's first wife Henrietta died in 1867 after nineteen years of marriage, four sons and five daughters. Nathaniel remarried in 1869, taking Mary Anne Hooke as his wife. They had no children together. Nathaniel's fourth child, William Urban Billing, joined his firm in 1880 and practiced as Billing and Son. They worked together until 1895 when Nathaniel retired. Nathaniel died at his home in Westbury Street East St Kilda in 1910 at the age of 88.