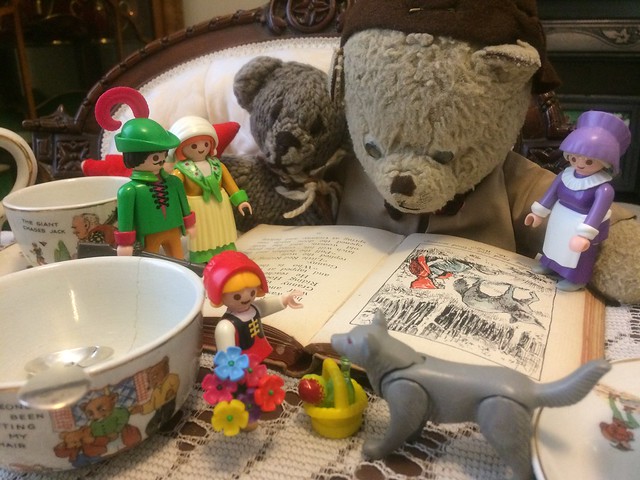 Paddington and Scout Celebrate International Read a Faerie Tale Day 2021
PADDY: *Reading aloud to Scout.* "Little Red Riding Hood met a great big grey wolf. She was not a bit aftaid though, not she. She said ‘Good morning, Mr. Wolf,’ as politely as could be, and when he asked her where she was going she told him all about her Grandmamma being ill and how she was on her way to enquire after her health..."

PADDY: "Scout! Are you paying attention to the story?"

SCOUT: "Oh yes, Paddy! Of course! I was just watching Little Red Riding Hood over there."

SCOUT: "But Paddy! She is right there, next to the sugar bowl! " *Points more urgently.* "Surely you can see her, Paddy? "

PADDY: "I’m sorry Scout, but I only see the lace tablecloth. "

PADDY: "I’m sorry Scout, but I don’t. It must be your wonderful imagination running away with you into your favourite faerie tale. "

SCOUT: "Well, if that is true, Paddy, it must be because you are the best bear in the whole wide world to read faerie tales! I love it when you read me stories. " *Snuggles against Paddy.* "I love you Paddy, very, very much! "

PADDY: "Well that makes me happy, Scout. And I love you very, very much too! "

PADDY: "Oh, yes, where was I? Oh yes, ‘Little Red Riding Hood was on her way to enquire after her Grandmammas health and to take her a few dainties to tempt her appetite…’ Oh, hullo everyone! Scout and I are reading Little Red Riding Hood in one of Daddy's very special copies of faerie tales from the 1920s." *Looks up.* "Why you ask? Well, we are getting started early for International Tell a Faerie Tale Day."

SCOUT: "What is International Tell a Faerie Tale Day?"

PADDY: "Well Scout, International Tell a Faerie Tale Day is an informal observance held on the 26th of February every year. It provides a perfect opportunity to read faerie tales."

SCOUT: "But Paddy, we read faerie tales all the time, not just on the 26th of February."

PADDY: "I know Scout, but some adults need an excuse to reconnect with their inner child."

SCOUT: "Daddy doesn't! He reads as many faerie tales as we do."

PADDY: "More than us I think, Scout."

SCOUT: "Oh that's sad that others don't read faerie tales as much as we do. They are missing out on so much! They are beautiful, oh except when the Big Bad Wolf gobbled up Little Red Riding Hood and that was the end of the story, and when the Beast gets turned back into a crummy old prince when Beauty fell in love with him as the Beast!"

PADDY: "Well, whether you think they are beautiful or not, Scout, Daddy and I encourage you all, even if you don’t have children or your children are not at home or grown up, to not miss the opportunity to reacquaint yourself with faerie tales. It’s perfectly acceptable to read faerie tale books alone, although I prefer reading them with Daddy, Scout or both. Make a cup of yummy hot chocolate, curl up in a chair and immerse yourself in the world of princes and princesses, evil witches and mischievous faeries, dragons and unicorns, talking animals and magical plants."

PADDY: "We have some hot tea right here in our Jack and the Beanstalk teapot, Scout."

SCOUT: "I could have a hot chocolate too, Paddy. Then I'd live happily ever after."

PADDY: "For at least an hour or so until you get a grumbly tummy, Scout."

Paddy is right, he and Scout have much reading to do, as I have lent them my 1921 copy of "Nursery Tales" by L. L. Weedon, illustrated by E. Stuart Hardy, published by Ernest Nister.

The Little Red Riding Hood characters from Scout’s imagination are Playmobil figures. Playmobil is a line of toys produced by the Brandstätter Group, headquartered in Zirndorf, Germany. Production began in 1974. Playmobil began to be sold worldwide in 1975, and by 2009, approximately 2.2 billion Playmobil figures had been sold. The signature Playmobil toy is a 7.5 cm tall human figure with a particular smiling face. A wide range of accessories, buildings and vehicles, as well as many sorts of animals, are also part of the Playmobil line. Playmobil toys are produced in themed series of sets as well as individual special figures and playsets. New products and product lines developed by a 50-strong development team are introduced frequently, and older sets are discontinued. Promotional and one-off products are sometimes produced in very limited quantities. These practices have helped give rise to a sizeable community of collectors.

This beautiful faerie tale pantomime nursery tea set was made in England by the Shell China Company in the 1930s. It features four cups and saucers (not all the set is being used today) as well as a teapot, milk jug and sugar bowl. It is a sister set to a larger tea set that I also have, made by the Shell China Company. This differs from the tea set by the shape of the teapot, and the size and shape of the cups and their handles. Each piece is gilt edged and decorated and feature different faerie tales including: "Cinderella", "Little Red Riding Hood", "Dick Whittington and his Cat", "Jack and the Beanstalk" and "Goldilocks and the Three Bears" amongst others. The set I acquired from England from a woman who was selling her mother's estate. I think she was pleased that it was going to someone who would treasure it (which I do all my tea sets). As well as a sister faerie tale tea set, it also has a sister set to a 1920s Shell China Company nursery rhyme tea set that I was given as a gift some years ago by a close friend who knows I collect nursery ware and children's tea sets. There are also doll (bear) sized tea spoons which are sterling silver salt spoons, and the spoon in the "Goldilocks and the Three Bears" sugar bowl is a Nineteenth Century sterling silver mustard spoon.