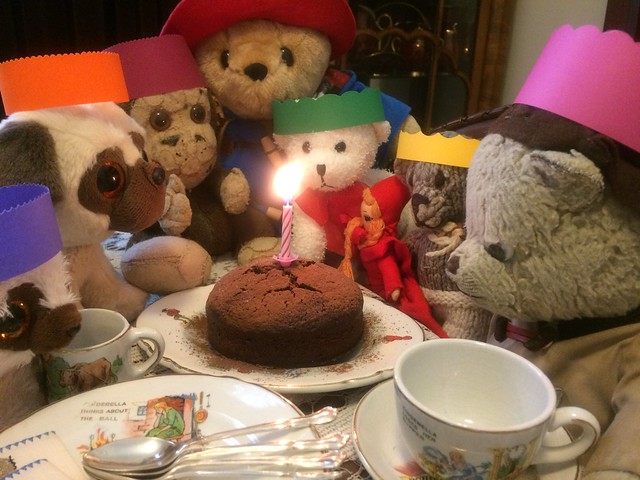 DADDY: "Now make a wish Scout and blow out the candle!"

*Celebratory applause, cheering and barking arises from the party guests as Scout prepares to blow out the candle on his cake.*

SCOUT: "Hullo everyone! Do you know what? Bears have two birthdays. I don't actually know when my first birthday was as I can't remember, so I have decided that my other birthday will be the day I came to live forever with Daddy and Paddy, which was the 27th of March! Now Paddy and I are not allowed to use the oven for fear of singeing our plush fur, so Daddy has been so kind and has baked me a birthday cake! It is a chocolate hazelnut cake, because I love chocolate anything! It is dusted with drinking chocolate. Isn't Daddy nice to do that just for me? I can't eat that cake all by myself, even with a grumbly tummy, so I am having a birthday party. It's my second birthday this year! I have invited Paddy and Daddy of course. I've also asked our pug dog Cabbage and his little sister Lettuce to come along, and also Chippy the monkey who lives in the front room. And because Cousin Paddington is stopping with us because of the nasty virus that has stopped people travelling around the world for now, he gets to be part of the celebration too! I know that everyone who I've asked to come will enjoy the occasion!

This beautiful faerie tale pantomime nursery dinner set was made in England by the Shell China Company in the 1930s. It features six cups, saucers and plates as well as a teapot, milk jug, sugar bowl, platter, sandwich plate, a lidded soup tureen on its own dish and a gravy or cream jug on its own dish. Each piece is gilt edged and decorated and feature different faerie tales including: "Cinderella", "Little Red Riding Hood", "Dick Whittington and his Cat", "Jack and the Beanstalk" and "Goldilocks and the Three Bears" amongst others. The set I acquired from England, and it is a sister set to a 1920s Shell China Company nursery rhyme tea set that I was given as a gift some years ago by a close friend who knows I collect nursery ware and children\'s tea sets. The platter on which Scout's birthday cake sits features his favourite faerie tale: "Little Red Riding Hood" Each guest at the tea party also has a tiny doll (bear) sized nursery napkin which is hand embroidered with a donkey motif. There are also doll (bear) sized tea spoons which are sterling silver salt spoons, and the sugar tongs in the "Goldilocks and the Three Bears" sugar bowl is from the Eighteenth Century and is sterling silver. Their dessert spoons are sterling silver coffee spoons made by James Dixon and Sons in London in 1921.

My Paddington Bear came to live with me in London when I was two years old (many, many years ago). He was hand made by my Great Aunt and he has a chocolate coloured felt hat, the brim of which had to be pinned up by a safety pin to stop it getting in his eyes. The collar of his Macintosh is made of the same felt. He wears wellington boots made from the same red leather used to make the toggles on his Macintosh.

Chippy the monkey came to live with me when I was four. His name is derived from his innards, which are broken chips of hazelnut shells. He was made in America some time in the mid Twentieth Century. He features beautiful brown glass eyes, a felt face, hands and feet. He was given to me by one of my Grandfather's friends who worked in a small high street toy shop which sold a mixture of new, vintage and antique toys. Chippy was vintage at the time, and had been well loved prior, so with a few holes, some worn plush and patches, he was too worn to be sold, but my family friend knew that my gentle nature and respect for my toys meant he could find a new home with me for a long time. All these decades later, she was proven right, for he still lives with me; a bit more loved, a bit more worn and with a few more patches. He also has some red chalk marks on his right hand which I remember putting on him by accident when I was six! He wanted to draw a rose on my chalkboard and I helped him do it!

Travelling all the way from London, Cousin Paddington was caught in transit thanks to the Coronavirus pandemic, so it looks like he is stopping with us for a long while. That makes me happy, as the more I look into his happy, smiling face, the more attached I am becoming to him.

Bogart has only arrived in the last few weeks. He has travelled all the way from Georgia, via Alabama as a gift to me from a friend. I look forward to getting to know his character, but I can already say that he has lovely Southern manners and seems to be a fun and gentle soul with an inquisitive nature.

Cabbage is Paddy's Pug Dog. He was a gift to Paddy from a friend who also likes Pugs. He is fiercely loyal to Paddy, Scout, Cousin Paddington and Bogart, but seldom stays around long enough to have his picture taken, as there are always new adventures to sniff out.