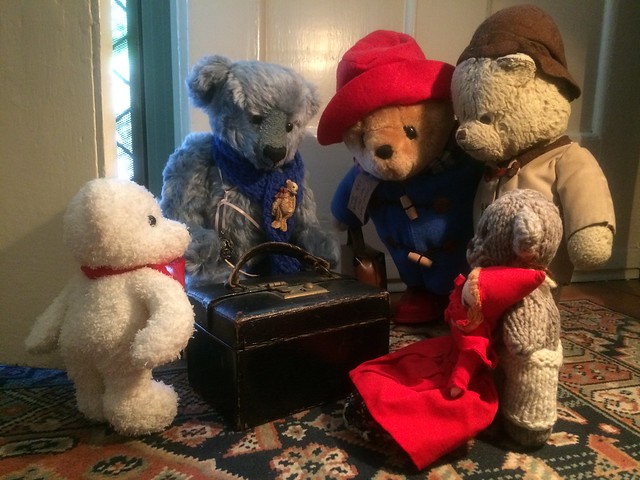 SCOUT: "Paddy! Paddy who is at the front door?"

SCOUT: "Daddy says that we are not to open the door to strangers." *Puts paw to mouth in concern.*

PADDY: "That’s alright, Scout. I’ll ask who it is first, then we will know who it is and whether they are a stranger or not. Hullo! Who is at the door please?"

VOICE FROM THE OTHER SIDE OF THE DOOR: "Hullo Paddy! It's me, Jago!"

SCOUT: "Jago? Who is Jago, Paddy? It could be a trick, Paddy!" *Tugs on Paddy's sleeve.* "Like the Big Bad Wolf in Little Red Riding Hood!" *Looks concerned.*

PADDY: "Nonsense Scout! Jago is a bear friend from England. There are no Big Bad Wolves here!" *Opens front door.* "Jago! How do you do! Please, do come inside."

JAGO: "Oh thank you! You must be Paddy! How do you do." *Pulls in a large black leather portmanteau.*

PADDY: "Welcome Jago. Your Mummy wrote to Daddy to let us know you were on your way. Did you have a good trip? Goodness! What a big case you have!"

JAGO: "Luckily, I hibernated most of the journey Paddy, so it was very pleasant." *Yawns.*

SCOUT: "Paddy? Paddy!" *Tugs on Paddy's sleeve.* "Paddy who is Jago? We don’t know him. He is a stranger. Who is his Mummy? Do we know his Mummy?" *Hides behind Paddy and cuddles Dolly.*

PADDY: "Oh don’t worry, Scout! Jago is perfectly fine to talk to and let in the house. His Mummy is very nice, as is he. He won’t be a stranger for long! Don’t be scared or shy. Come and say hullo to Jago."

JAGO: "How do you do, Scout!" *Smiles in a friendly way and holds out paw to Scout.* "My Mummy has told me all about you and Paddy, and Cousin Paddington, Bogart and your Daddy. I have been following your exciting adventures in England, and I asked my Mummy if it was alright if I could come and stay with you. My Mummy is friends with your Daddy, and your Daddy said that I could come and stay for as long as I like. He even said that I may call him Daddy. I hope you don’t mind."

SCOUT: "Well, no, I don’t mind, now that I know that your Mummy is acquainted with our Daddy" *Looks inquisitively at black leather portmaneau.* "Pardon me for asking, Jago. What is in your travel case? It looks heavy!"

JAGO: "It’s full of presents for you Scout, and Paddy and Bogart and Cousin Paddington!"

SCOUT: "Presents for us, Jago?"

COUSIN PADDINGTON: "Did I hear my name mentioned?"

BOGART: "Did I hear the word present associated with my name?"

SCOUT: "Oh Cousin Paddington, Bogart, this is Jago from England. He has come to stay with us. Daddy won't mind if Jago stays with us, will he, Paddy?" *Reaches out paw and takes Jago’s paw.*

PADDY: "No, he won't, Scout. He is expecting Jago. I have been sorting out a lovely bed for him to sleep in."

COUSIN PADDINGTON: "How do you do, Jago. Please come and have some elevenses with us. I have just asked Daddy to fill the teapot. You must be quite tired and hungry after your long journey."

BOGART: "I do hope you are hungry, Jago! We are having shortbreads, tarts and jam fancies!"

JAGO: "Oh thank you Bogart and Cousin Paddington. I must confess that I do have a grumby tummy! My presents for you all will also help resolve that, as my portmanteau is stuffed full of special chocolates from England, for all of you!"

JAGO: "My pleasure! I did have to eat a few when I wasn’t hibernating on the journey, but there are still so many left. I do hope you don’t mind."

Jago is a recent addition to my ever-growing family. A gift from a dear friend in England, he is made of English mohair with suede paw pads and glass eyes. He is a gentle bear, kind and patient who carries an air of calm about him. He is already fitting in with everyone else very nicely.

Travelling all the way from London, Cousin Paddington was caught in transit thanks to the Coronavirus pandemic. After so long here he has decided to stop with us permanently. That makes me happy, as the more I look into his happy, smiling face, the more attached I am becoming to him.