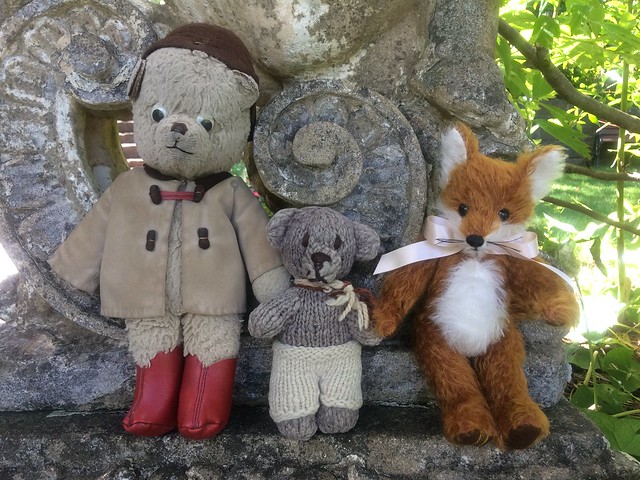 Paddington, Scout and Freddy Bid Farewell to the Forest Glade Gardens... for Now!
DADDY: "Alright Freddy, are you ready to come home with Paddy, Scout and I?"

PADDY: "And have you said goodbye to all the flowers and trees that you want to say goodbye to, Freddy?"

FREDDY: "I have, thank you Paddy."

SCOUT: "Then let's go! Come on Freddy! I can't wait for you to meet everybear!"

PADDY: "Wait, Scout! We must say goodbye to the Forest Glade Gardens ourselves."

DADDY: "And before you say goodbye, I would like to take a photo of you three as a nice keepsake from today."

Freddy Fox is made by Merrythought in England. I bought him, of all places, from a men’s accessory shop in Melbourne’s Block Arcade, called Mr. Wares. Freddy Fox is made of English Mohair with felt paws and glass bead eyes. He has so much charm and charisma that already he is winning hearts with anyone whom he meets, and he is kind and sweet, which makes him an ideal member of our family.

The Forest Glade Gardens are well established European inspired landscaped gardens of six hectares that are to be found on the Mount Macedon Road in the hill station town of Mount Macedon.

The Forest Glade Gardens are just shy of one hundred years old. The gardens were originally two adjoining properties that comprised orchards and lush grazing paddocks. In 1941 local family the Newtons purchased and extended the property and set about creating one of Mount Macedon's most stunning gardens.

In 1971 the Forest Glade Gardens were acquired by Melbourne property developer Mr. Cyril Stokes who together with his partner Trevor Neil Bell, developed the gardens even further. Cyril was a great collector of European antiques, and his love of European antiquity is reflected in the gardens, particularly in the many classical marble and bronze statues dotted about the grounds.

Unfortunately the Forest Glade Gardens were partly destroyed by the tragic Ash Wednesday bushfires of 1983. However, after many years of hard labour put in by Cyril and Trevor, The Forest Glade Gardens were reborn from the ashes. The gardens are built on a sloping block and consist of a range of terraces all of which offer wonderful vistas. A garden designed to give pleasure all year round, the Forest Glad Gardens contain several heritage listed trees and are made up of smaller themed gardens including; the Italian Garden, the Japanese Garden, the Daffodil Meadow, the Peony Walk, Hydrangea Hill, the Topiary Gardens, the Bluebell Meadow, the Fern Gully and the Laburnum Arch.

In 2011 the property was gifted to a registered charity - The Stokes Collection Limited - with the intention of keeping the Forest Glade Gardens maintained and open to the public.

The name of Mount Macedon is apparently derived from Philip II, who ruled Macedon between 359 and 336BC. The mountain was named by Thomas Mitchell, the New South Wales Surveyor General.

preview: Paddington, Scout and Freddy Bid Farewell to the Forest Glade Gardens... for Now! on Flickriver