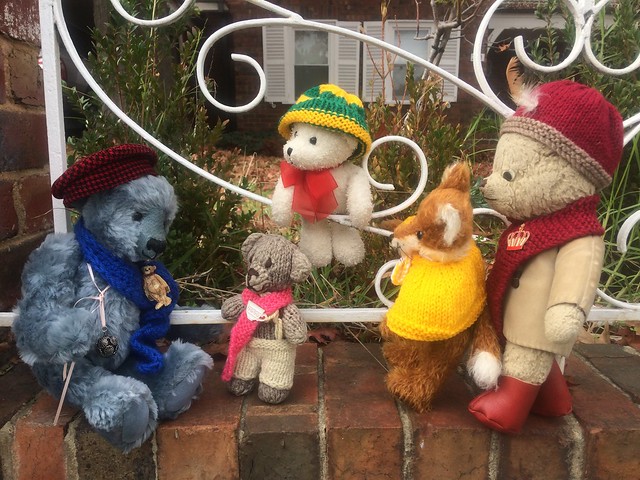 Paddington, Scout and the Lesson About Discretion and Valour
SCOUT: “Ooh look! A twisty twirly fence!”

BOGART: “Shall we climb it, Scout?”

SCOUT: “So long as there are no evil witches about to chase us with a broom.”

BOGART: “I’m ahead of you Scout!” *Giggles and starts climbing.*

FREDDY: *Giggles and puts paw on a curlicue to start climbing.*

SCOUT: “Jago? Jago, are you going to climb too?”

SCOUT: “But why not, Jago?” *Concerned.* “Are you feeling alright?”

JAGO: “Oh I’m feeling fine, Scout.” *Looks up at curlicues.* “I just think that in this case, discretion is the better part of valour for me.”

SCOUT: “What do you mean, Jago? You are valiant and brave, like the Valliant Little Tailor in the faerie tale who defeated giants and captured a unicorn.”

BOGART: “Where is the giant?” *Looks about concerned.*

FREDDY: “What about the unicorn?” *Looks around with interest.*

PADDY: “Oh there aren’t any here. Scout was just talking about those in the faerie tale about the Valliant Little Tailor who killed seven flies with one stroke.”

JAGO: “What I mean, Scout, is that this fence looks a bit much for me.”

SCOUT: “But Jago! You love climbing!”

PADDY: “We all enjoy climbing, Scout, but like you, Jago isn’t very good at getting down again.”

SCOUT: “But what does that have to do with valour and dis…dis…?”

JAGO: “Oh discretion isn’t a sneeze, Scout. It’s a word. And what I mean when I says that discretion is the better part of valour is that I am choosing to avoid a sticky situation by not climbing this fence. If I do, I will probably get stuck, and then Daddy will have to rescue me.”

PADDY: “I’ll stay down here too, Jago, and keep you company.”

SCOUT: “Well that’s alright Jago. You and Paddy could still climb anyway, even if you get stuck, because I am going to get stuck and will need Daddy to rescue me.”

FREDDY: “And so will I, Jago, because I’m not good at getting back down either.”

SCOUT: “So you see, Daddy can rescue us all when we get stuck!”

PADDY, SCOUT, BOGART, JAGO and FREDDY: *All climb the curlicues of wrought iron on the fence until the reach the top.*

JAGO: “Well now what, Scout? We are all stuck up here.”

SCOUT: “That’s easy, Jago! We wait for Daddy! When we see him, we call for help to get his attention!”

DADDY: “Hullo you five! Whatever are you doing there?”

SCOUT: “We decided to climb this tall fence, Daddy!”

JAGO: “And then we all got suck, Daddy.”

PADDY: “So we are hoping that you might rescue us, Daddy. Can you help get us down please? Only if it isn't too much trouble Daddy.” *Blushes pink beneath plush fur.*

DADDY: *Tutts and shakes head as he reaches for Paddy, Scout, Bogart, Jago and Freddy to rescue them.*

DADDY: “And I love you all, very, very much, Paddy, Scout, Bogart, Jago and Freddy.”

SCOUT: “Now that we have been rescued, let’s all go and play hide-and-seek! Daddy, we will hide and you can seek us out!”

PADDY, SCOUT, BOGART, JAGO and FREDDY: *Giggle as they run down the footpath to find places to hide.*

DADDY: *Sighs and shakes head as he follows bears resignedly.*

Now that the colder weather is here, Paddy, Scout, Cousin Paddington, Bogart, Jago, Freddy and I are taking advantage of the days when there is sunshine by finding adventures in the crisp outdoors. Even our own front garden provides beauty and adventures in abundance for little bears and foxes!

Bogart has travelled all the way from Georgia, via Alabama as a gift to me from a friend. He has lovely Southern manners and seems to be a fun and gentle soul with an inquisitive nature.

Jago was a gift from a dear friend in England. He is made of English mohair with suede paw pads and glass eyes. He is a gentle bear, kind and patient who carries an air of calm about him. He is already fitting in with everyone else very nicely.

preview: Paddington, Scout and the Lesson About Discretion and Valour on Flickriver