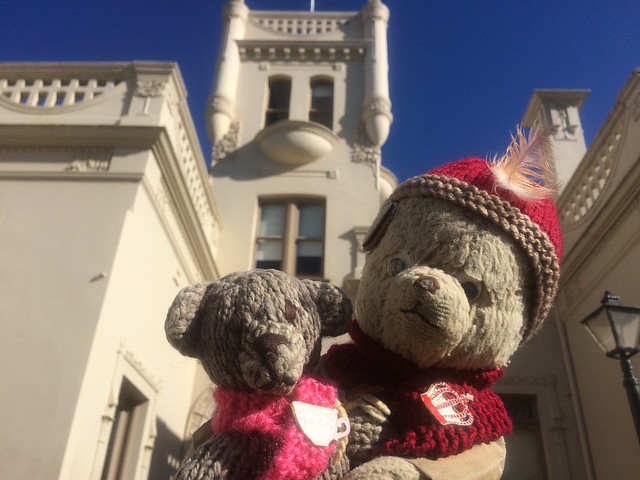 Paddington and Scout Visit Billilla I.
PADDY: “Hullo everyone! It was such a beautiful day today that Daddy has decided to take us out with him on an adventure to…”

SCOUT: “Ooooh Look Paddy! Daddy has brought us out today to see a palace! Wow!”

PADDY: “Well Scout, as I was just about to say…”

SCOUT: “Oh my goodness Paddy! Look! It has a tower which is decorated with pretty flowers! Wow! I wonder if Rapunzel lives in it! Oh I wish mijn bests vriend Peter were here to see it. We would climb the tower together and rescue Rapunzel from the mean, nasty old witch.”

SCOUT: “Oh no, of course it can’t be Rapunzel’s tower, because there are several windows in it, and a door. Rapunzel was put in a tower with no door and only one window very high up by the mean, nasty old witch.”

SCOUT: “Then in that case this must be Cinderella’s palace, with a very grand ballroom to dance with. Look there are some stairs there. She must have run down them at midnight! Wow!” *Trembles with excitement.*

SCOUT: “I wonder if I can find her glass slipper lying around here somewhere? Silly Cinderella was very neglectful of her belongings! If I had a pair of glass slippers from my faerie godmother, I wouldn’t go losing them!” *Nods emphatically.*

SCOUT: “If I do find her glass slipper, I wonder whether it will fit me? I have a very delicate paw, you know.”

PADDY: “Scout, I was just trying to tell you and our Flickr friends where we are.”

SCOUT: “You know, Paddy? Well, why didn’t you say so earlier? Where are we please? Whose palace is this?”

PADDY: “As I was saying, before I was so rudely interrupted by a certain little bear,” *Looks at Scout, who then looks around for a little grey bear.* “It was such a beautiful day today that Daddy has decided to take us out with him on an adventure to Billilla Mansion, in the Melbourne suburb of Brighton.”

SCOUT: “Do you mean this isn’t the palace of a princess, Paddy?” *Disappointed.*

PADDY: “No Scout. I’m sorry. It’s not. Billilla is a mansion that was bought in 1888 by a man called William Weatherly, who was a pastoralist.”

SCOUT: “Oh pooh! I was so hoping to find a glass slipper to wear!”

DADDY: “Well Scout, Billilla does have a nursery inside it, so perhaps you will find one there.”

SCOUT: “Are we going inside Bill… Billillilllillllll…”

SCOUT: “Are we going inside the big house, Daddy?”

DADDY: “Yes we are. It is open just for today, and we are amongst the first ten people and bears to go inside and see it.”

DADDY: “Now come along, and we will queue up to go inside.”

Paddy is correct. He, Scout and I visited the historical Art Nouveau mansion of Billilla in the Melbourne suburb of Brighton recently, after it was opened to the public for the first time in many years as part of the Melbourne Open House weekend 2022.

Billilla Historic Mansion, which was the former the home of the Weatherly family, is a beautiful heritage property incorporating a stately formal garden and the magnificent historic house.

Billilla, at 26 Halifax Street, Brighton, is one of Melbourne’s few remaining significant homesteads. The mansion was built by merchant Robert Wright in 1878 on land which had originally been owned by Nicholas Were. The house has a mixture of architectural styles, featuring a Victorian design with Art Nouveau features. With exquisite formal gardens, which retain much of their original 19th Century layout, the property was owned by the Weatherley family (whom named it Billilla) from 1888 to 1972.

Billilla retains many original Victorian elements and a number of outbuildings still stand to the rear of the property including the butler’s quarters, dairy, meat house, stable garden store and coach house.

Billilla was used as a backdrop in the Australian 1980 Channel 10 miniseries adaptation of Sumner Locke Elliott's "Water Under the Bridge". It was used at the Sydney harbourside home of Luigi, Honor and Carrie Mazzini.

preview: Paddington and Scout Visit Billilla I. on Flickriver