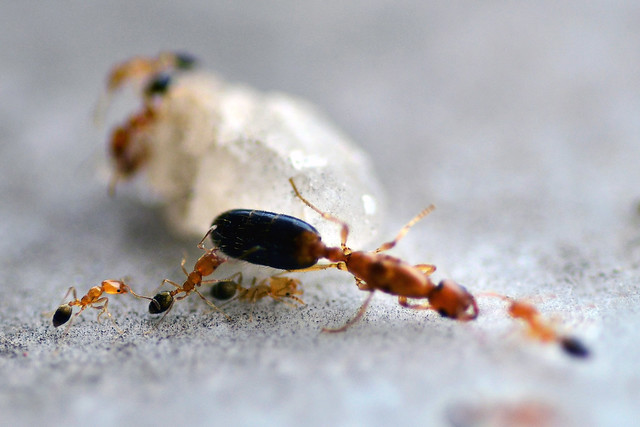 16 frames to share you a little story of red ants- Frame 16/16: And finally the group of workers escorted their queen to a distant hiding place. With their disappearance the rest of the colony vanished in moments. The drama ended finally.
Honestly, none of my 16 shots was of good quality, but could tell you an interesting story.


My little story of Ants

It was on 31st of March, afternoon, pre-lunch, temperatures soaring to 37 degrees Celsius, when I decided to transfer my plants to a cooler place. Just when I lifted one of the pots I noticed a colony of red ants with their eggs and imagos, a little disapproved of my move to remove their shelter, waiting all confused deciding of their next move.
At first I was perplexed and didn’t know what to do. And I finally decided to let them be. Soon the agitated colony, started scattering out in search of safe places carrying their eggs and imagos. When I observed a little closer into their overall behaviours, I found something amazing and fascinating, which I had never experienced before. With an initial disorganized and unplanned move, the worker ants quickly started coordinating themselves by their unique ways of communications, and started planned movements towards three-four nearest hiding places. They were quickly evacuating the place carrying all their essentials.

I did not waste any time to bring out my macro lens to investigate the finer details of their challenging behaviours through the viewfinder of my DSLR.
Suddenly, I observed two comparatively much larger individuals amongst them, having many different features compared to the others. Most possibly they were females (which I confirmed later by their characteristic features from Google), staying lethargic amidst the dispersing colony, but always surrounded by some busy workers. They were constantly looking after them (which I later knew as the princess of a newly forming colony migrating for a different kingdom), and not leaving apart, like the other members being engaged in allocating their all essential objects.
They were constantly attending, caring, and communicating with their antennas, and surely by means of many other communication systems, easily surpassing my bare human senses. The big-headed soldiers were never found either attending the queen or carrying their babies. Instead, they were found mostly agitated and alert, doing frequent communications with the workers and possibly the young soldiers. The workers were found doing the major task.
A span of few minutes happened like an amazing drama. The whole story raised innumerable quests most of which will probably remain unfolded.
What I understood at a glance, is that I saw only the visible portion of an iceberg!
This is an endless world of animal behavioural science. Scientists spare almost a life to understand a little bit of it. But I learnt one thing that how organized, disciplined, coordinated, intelligent, dutiful, and loyal these tiny creatures could be!
I saw some of them dragging carcasses of their colony mates with them, to their new places. I couldn’t believe this. What will they do with these carcasses? It didn’t seem like they’d eat them! I don’t know of any practices of cannibalism in them. Then, why? Do they have rituals? Or is it cause of hygiene? I had been there for like 40 minutes, watching them, through my lens, where even the tiniest creature looked pretty magnified, and I came to a simple conclusion. Forty years through the pages of many encyclopedias couldn’t give me what I got today, in 40 minutes.
Unfortunately, my DSLR battery ran extremely low, and I wasn’t being able to focus my macro lens so quickly on target. With such frustrations, I took a number of snaps, of many being out of focus. I have uploaded a few selected ones. I admit that the qualities of the images are not good enough, but they are not bad enough to tell my little story. Still images only represent glimpses. But the whole event was truly wonderful. I could not manage to bring out my stand within time for steady macros and videos. I know, I really missed the opportunity of better documentation.
It is quite possible that my little story is already a known fact to the naturalists, but these were all my discoveries to my unknown world.

Please read my little story before you pass on to my images. Wish you may enjoy my little effort.

preview: 16 frames to share you a little story of red ants- Frame 16/16: And finally the group of workers escorted their queen to a distant hiding place. With their disappearance the rest of the colony vanished in moments. The drama ended finally. on Flickriver