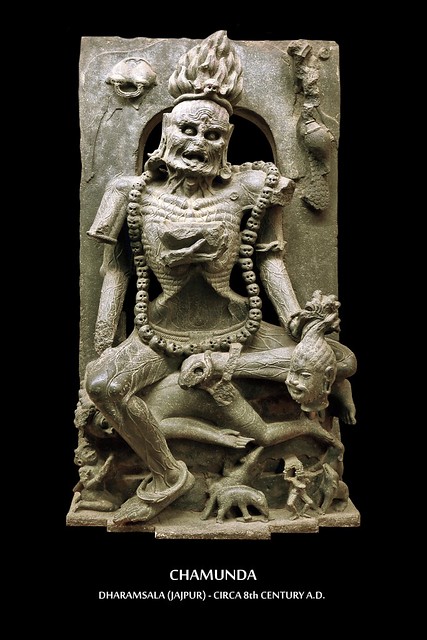 India - Odisha - Bhubaneswar - Odisha State Museum - Chamunda - 2
Chamunda (Sanskrit: चामुण्डा, Cāmuṇḍā), also known as Chamundi, Chamundeshwari and Charchika, is a fearsome aspect of Devi, the Hindu Divine Mother and one of the seven Matrikas (mother goddesses). She is also one of the chief Yoginis, a group of sixty-four or eighty-one Tantric goddesses, who are attendants of the warrior goddess Durga. The name is a combination of Chanda and Munda, two monsters whom Chamunda killed. She is closely associated with Kali, another fierce aspect of Devi. She is sometimes identified with goddesses Parvati, Chandi or Durga as well. The goddess is often portrayed as haunting cremation grounds or fig trees. The goddess is worshipped by ritual animal sacrifices along with offerings of wine and in the ancient times, human sacrifices were offered too. Originally a tribal goddess, Chamunda was assimilated in Hinduism and later entered the Jain pantheon too. Though in Jainism, the rites of her worship include vegetarian offerings, and not the meat and liquor offerings.

ORIGINS
Ramakrishna Gopal Bhandarkar says that Chamunda was originally an indigenous goddess worshipped by the Munda peoples of the Vindhya range of central India. These tribes were known to offer goddesses animal as well as human sacrifices along with ritual offerings of liquor. These methods of worship were retained in Tantric worship of Chamunda, after assimilation in Hinduism. He proposes the fierce nature of this goddess is due of her association with Vedic Rudra (identified as Shiva in modern Hinduism), identified with fire god Agni at times. Wangu also backs the theory of the tribal origins of the goddess.

ICONOGRAPHY
The black or red coloured Chamunda is described as wearing a garland of severed heads or skulls (Mundamala). She is described as having four, eight, ten or twelve arms, holding a Damaru (drum), trishula (trident), sword, a snake, skull-mace (khatvanga), thunderbolt, a severed head and panapatra (drinking vessel, wine cup) or skull-cup (kapala), filled with blood. Standing on a corpse of a man (shava or preta) or seated on a defeated demon or corpse (pretasana), she is described as having a skeletal body with three eyes, a terrifying face, drooping breasts, protruding teeth, long nails and a sunken belly. She has a scorpion sitting on her navel like a decoration. Chamunda is depicted adorned by ornaments of bones, skulls, serpents and scorpions, symbols of disease and death. She also wears a Yajnopavita (a sacred thread worn by mostly Hindu male priests) of skulls. She wears a jata mukuta, that is, headdress formed of piled, matted hair tied with snakes or skull ornaments. Sometimes, a crescent moon is seen on her head. Her socket eyes are described as burning the world with flames. She is accompanied by fiends and goblins. She is also shown surrounded by skeletons or ghosts and beasts like jackals, who are shown eating the flesh of the corpse which the goddess sits or stands on. The jackals and her fearsome companions are sometimes depicted as drinking blood from the skull-cup or blood dripping from the severed head, implying that Chamunda drinks the blood of the defeated enemies. This quality of drinking blood is a usual characteristic of all Matrikas, and Chamunda in particular. At times, she is depicted seated on an owl, her vahana (mount or vehicle). Her banner figures an eagle.These characteristics, a contrast to usual Hindu goddess depiction with full breasts and a beautiful face, are symbols of old age, death, decay and destruction.

According to a later episode of Devi Mahatmya, Durga created Matrikas from herself and with their help slaughtered the demon army of Shumbha-Nisumha. In this version, Kali is described as a Matrika who sucked all the blood of the demon Raktabija. Kali is given the epithet Chamunda in the text. Thus, the Devi Mahatmya identifies Chamunda with Kali.

In Varaha Purana, the story of Raktabija is retold, but here each of Matrikas appears from the body of another Matrika. Chamunda appears from the foot of the lion-headed goddess Narshmi. Here, Chamunda is considered a representation of the vice of tale-telling (pasunya). The Varaha Purana text clearly mentions two separate goddesses Chamunda and Kali, unlike Devi Mahatmya.

According to another legend, Chamunda appeared from the frown of the benign goddess Parvati to kill demons Chanda and Munda. Here, Chamunda is viewed as a form of Parvati.

Matsya Purana tells a different story of Chamunda's origins. She with other matrikas was created by Shiva to help him kill the demon Andhakasura, who has an ability - like Raktabija - to generate from his dripping blood. Chamunda with the other matrikas drinks the blood of the demon ultimately helping Shiva kill him. Ratnakara, in his text Haravijaya, also describes this feat of Chamunda, but solely credits Chamunda, further says that Chamunda does a dance of destruction, playing a musical instrument whose shaft is Mount Meru, the spring is the cosmic snake Shesha and gourd is the crescent moon. She plays the instrument during the deluge that drowns the world.

ASSOCIATION WITH MATRIKAS
Chamunda is included in the Saptamatrika (seven Matrikas or mothers) lists in the Hindu texts like Mahabharata (Chapter 'Vana-parva'), Devi Purana and Vishnudharmottara Purana. She is often depicted in the Saptamatrika group in sculptures, examples of which are Ellora and Elephanta caves. Though she is always portrayed last (rightmost) in the group, she is sometimes referred to as the leader of the group. While other Matrikas are considered as Shaktis (powers) of male divinities and resemble them in their appearance, Chamunda is the only Matrika who is a Shakti of the great Goddess Devi rather than a male god. She is also the only Matrika who enjoys independent worship of her own; all other Matrikas are always worshipped together.

Devi Purana describe a pentad of Matrikas who help Ganesha to kill demons. Further, sage Mandavya is described as worshipping the Māṭrpaňcaka (the five mothers), Chamunda being one of them. The mothers are described as established by creator god Brahma for saving king Harishchandra from calamities. Apart from usual meaning of Chamunda as slayer of demons Chanda and Munda, Devi Purana gives a different explanation: Chanda means terrible while Munda stands for Brahma's head or lord or husband.

HINDU WORSHIP
A South Indian inscription describes ritual sacrifices of sheep to Chamunda. In Bhavabhuti's eighth century Sanskrit play, Malatimadhva describes a devotee of the goddess trying to sacrifice the heroine to Chamunda's temple, near a cremation ground, where the goddess temple is situated. A stone inscription at Gangadhar, Rajasthan, deals with a construction to a shrine to Chamunda and the other Matrikas, "who are attended by Dakinis (female demons)" and rituals of daily Tantric worship (Tantrobhuta) like the ritual of Bali (offering of grain).

Many Kshatriyas and even the Jain community worship her also as her Kuladevi "family deity". The Chapa dynasty worshiped her as their kuladevi. The Kutch Gurjar Kshatriyas also worship her as kuladevi and temples are located in Sinugra and Chandiya. Alungal family, a lineage of Mukkuva caste - (Hindu caste of Shudra origin) in Kerala - also worship chamundi in Chandika form, as Kuladevta and temple is situated in Thalikulam village of Thrissur, Kerala. This is an example of Chamunda worship across different caste sects.

TEMPLES
In the Kangra district of Himachal Pradesh, around 10 kilometres west of Palampur, is the renowned Chamunda Devi Temple which depicts scenes from the Devi Mahatmya, the Ramayana and the Mahabharata. The goddess's image is flanked by the images of Hanuman and Bhairava. Another temple, Chamunda Nandikeshwar Dham, also found in Kangra, is dedicated to Shiva and Chamunda. According to a legend, Chamunda was enshrined as chief deity "Rudra Chamunda", in the battle between the demon Jalandhara and Shiva. In Gujarat, two Chamunda shrines are located on the hills of Chotila and Panera. Kichakeshwari Temple, located near the Baripada, Charchika Temple, near Banki and Vaital Deula in Bhubaneswar, Odisha. Another temple is Chamundeshwari Temple on Chamundi Hill, Mysore. Here, the goddess is identified with Durga, who killed the buffalo demon. Chamundeshwari or Durga, the fierce form of Shakti, a tutelary deity held in reverence for centuries by the Maharaja of Mysore. The Chamunda Mataji temple in Mehrangarh Fort, Jodhpur, was established in 1460 after the idol of the goddess Chamunda - the Kuladevi and iṣṭa-devatā (tutelary deity) of the Parihar rulers - was moved from the old capital of Mandore by the then-ruler Jodha of Mandore. The goddess is still worshipped by the royal family of Jodhpur and other citizens of the city. The temple witnesses festivities in Dussehra - the festival of the goddess. Another temple, Sri Chamundeshwari Kshetram is located near Jogipet, in Medak District in Telangana State.

IN JAINISM
Early Jainism was dismissive of Chamunda, a goddess who demands blood sacrifice, which is against the principle of Jain vegetarianism. Some Jain legends portray Chamunda as a goddess defeated by monks like Jinadatta and Jinaprabhasuri. Another legend tells the story of conversion of Chamunda into a Jain goddess. According to this story, Chamunda sculpted the Mahavira image for the temple in Osian, Jodhpur and was happy with the conversions of the Oswals to Jainism. At the time of Navratri, a festival that celebrates the Divine Mother, Chamunda expected animal sacrifices from the converted Jains. The vegetarian Jains, however, were unable to meet her demand. Ratnaprabhasuri intervened, and as a result, Chamunda accepted vegetarian offerings, forgoing her demand for meat and liquor. Ratnaprabhsuri further named her Sacciya, one who had told the truth, as Chamunda had told him the truth that a rainy season stay in Osian would be beneficial for him. She also became the protective goddess of the temple and remained the clan goddess, Kuladevi, of the Oswals. The Sachiya Mata Temple in Osian was built in her honour. Some Jain scriptures warn of dire consequences of worship of Chamunda by the Hindu rites and rituals.
_______________________________________________

Odisha State Museum (Odia: ଓଡ଼ିଶା ରାଜ୍ୟ ସଂଗ୍ରହାଳୟ) is a museum in Bhubaneswar, Odisha. In its original form it was established in 1932 and later moved to the current building in 1960. The museum is divided into eleven sections, viz, Archaeology, Epigraphy, Numismatics, Armoury, Mining & Geology, Natural History, Art & Craft, Contemporary Art, Patta Painting, Anthropology and Palmleaf Manuscripts. The museum is headed by a superintendent and the administrative control lies in the hands of Cultural Affairs Department, Government of Odisha.

HISTORY
The origin of this museum can be traced back to 1932, when some historians and professors, like William Jones, Ghanashyam Das, N. C. Banerjee, Harekrushna Mahatab established a museum in Ravenshaw College, Cuttack. In 1945-46, the Museum was shifted to Brahmananda building in old Bhubaneswar and given the status of a State Museum by the Government of Odisha. Later, the Museum was shifted to Patel Hall in 1950 and again to another building in Unit - I, Bhubaneswar. In 1957, the foundation of the Museum was laid by then President of India, Rajendra Prasad, and finally the Museum in the current building started operating from 1960.