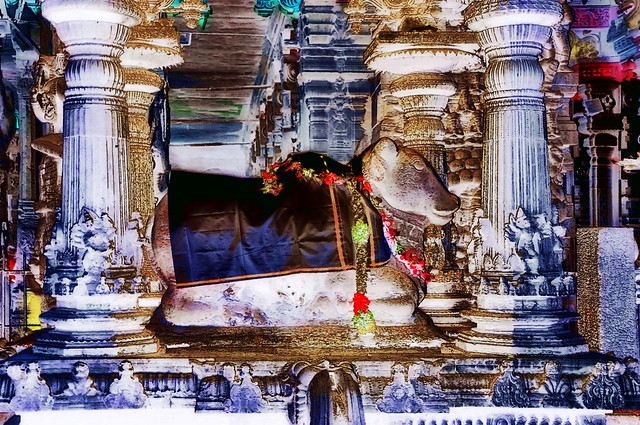 India - Tamil Nadu - Madurai - Meenakshi Amman Temple - Nandi - 127bb
Nandi is the name for the bull which serves as the mount (Sanskrit: Vahana) of the god Shiva and as the gatekeeper of Shiva and Parvati. In Hindu Religion, he is the chief guru of eighteen masters (18 Siddhar) including Patanjali and Thirumular. Temples venerating Shiva display stone images of a seated Nandi, generally facing the main shrine. There are also a number of temples dedicated solely to Nandi.

The application of the name Nandi to the bull (Sanskrit: vṛṣabha) is in fact a development of recent centuries, as Gouriswar Bhattacharya has documented in an illustrated article entitled "Nandin and Vṛṣabha". The name Nandi was earlier widely used instead for an anthropomorphic deity who was one of Shiva’s two door-keepers, the other being Mahākāla. The doorways of pre-tenth-century North Indian temples are frequently flanked by images of Mahākāla and Nandi, and it is in this role of Shiva’s watchman that Nandi figures in Kālidāsa’s poem the Kumārasambhava.

ETYMOLOGY
The word “Nandi” is derived from the ancient Indian Language of Sanskrit. The Sanskrit word 'Nandi' in English translates as Happy, Joyous or Happy Person.

BIRTH OF NANDI
There was a sage named Shilada who underwent severe penance to have a boon — a child with immortality. Lord Indra pleased of the austerities of Shilada appeared in front of him to offer a boon. After hearing the request of Shilada and his desire to have an immortal child, Lord Indra suggested he pray to Lord Shiva: nobody else could provide such a boon. Sage Shilada continued his penance for 1,000 years. He was totally immovable for many years, so the termites settled on his body and slowly started to build up their nest. Finally, his whole body was covered up by them. The insects started to eat his flesh and imbibed his blood. At last, only bones remained.

Lord Shiva appeared in front of him and provided the boon for the child. Moreover, Lord Shiva provided Sage Shilada his old form with a single touch. Sage Shilada performed Yagna and a child appeared from the sacrificial fire. His body was clad in armour made out of diamonds. The celestial dancers and singers performed on this auspicious occasion and the deities showered flowers on the child. The boy was named ’Nandi’ — who brings joy. Shilada brought the child home. Immediately the boy lost his divine appearance to an ordinary child. The child completely forgot all about his birth. Sage Shilada was worried about the sudden change. He devoted his time for Nandi's upbringing his education etc. By the age of seven, the boy was well versed in Veda and all sacred texts.

One day the deities Mitra and Varuna visited Sage Shilada. At the first sight of the boy, they commented: Though the boy had all auspicious signs, he would have a very short life. He would not live after the age of eight. Sage Shilada was mortified at this remark. Nandi could not bear his father's sorrow; he began to pray to Lord Shiva. Lord Shiva appeared before him and blessed him. Lord Shiva adorned the boy with a necklace and made him immortal. Lord Shiva blessed the child and declared that he would be worshiped along with Him and become his vahana (vehicle). Immediately the boy got all the divine powers and transformed into half bull-half human. He and Shilada went to Lord Shiva's abode to live.

DESCRIPTIONS ON NANDI IN HINDU RELIGIOUS TEXTS INCLUDE:
- Some Puranas describe Nandi or Nandikeshvara as bull face with a human body that resembles that of Shiva in proportion and aspect, although with four hands — two hands holding the Parasu (the axe) and Mruga (the antelope) and the other two hands joined together in the Anjali (obeisance). Brahma Vaivarta Purana mentions Krishna himself to have taken the form of a bull as no one else in the Universe can bear Shiva.
- Vehicle of Shiva: The bull Nandi is Shiva's primary vehicle and is the principal gana (follower) of Shiva.
- Gate keeper of Shiva's abode: The close association of Shiva and Nandi explains the presence of a statue of Nandi at the gate of many temples dedicated to Shiva. It also explains why the word "nandi" in the Tamil, Kannada and Telugu languages is used as a metaphor for a person blocking the way.[citation needed] In Sanskrit, a bull is called vrisha, which has another connotation — that of righteousness or Dharma. It is important to seek the blessings of Nandi before proceeding to worship Lord Shiva.
- Chief in Shiva's army: Some Puranas mention that Nandi lead the Shiva Ganas, Shiva's attendants.
- A Guru of Saivism: In addition to being his mount, Nandi is Shiva's foremost disciple. In the Natha/Siddhar tradition, Nandi is one of the primal gurus. He was the guru to Siddhar Thirumulanathar, Patanjalinathar and others.
- From the yogic perspective, Nandi/Nandhi/Nandikeshvara is the mind dedicated to Lord Siva, the Absolute. In other words, to understand and absorb Light, the 'experience and the wisdom' is Nandi which is the Guru within.
- Spiritually, Nandi represents an individual jiva (soul) and the message that the jiva should always be focused on the Atman (Paramatman).

LEGENDS
According to some puranas, Nandi was born to sage Shilada who got him by the grace of Shiva.

It was Nandi who cursed Ravana (the demon King of Lanka) that his kingdom would be burnt by a monkey (Vanara). And later Hanuman burnt Lanka when he went in search of Sita, who was kept prisoner by Ravana in Ashok Vatika.

In one puranic story, it is stated that once Siva and Parvathi were playing a game of dice. For any game there has to be an umpire, who has to declare who is the winner. Siva and Parvathi agreed to have Nandi (the divine bull) as the umpire. Nandi is a favorite of Siva, as he is Siva's vehicle. Although Siva lost the game, Nandi declared him the winner. It is stated that Parvathi was indignant over Nandi's partiality for Siva and cursed him that he should die from an incurable disease. Thereupon Nandi fell at the feet of Parvathi and pleaded for forgiveness. "Mother forgive me. Should I not show at least this amount of gratitude to one who is my master? Is it not humiliating for me to declare that my master has lost the game? To uphold his honor I no doubt uttered a lie. But am I to be punished with such severity for so small an offence?" Nandi prayed for forgiveness in this manner. Parvathi forgave Nandi and taught him the means to atone for his lapse. She told him. "The Chaturdasi day in the month of Bhadrapada is the day when my son's birthday is celebrated. On that day you have to offer to my son what pleases you most (green grass)". This means that one atones for one's sins when one offers to the Lord what is most pleasing and enjoyable to him. For Nandi the most enjoyable and relishing food is green grass. As directed by Parvathi Nandi worshipped Ganapathi by offering green grass. Nandi was then relieved of his dreaded disease. His health improved and by the grace of Parvathi he was redeemed.

When the positive forces, the devas, and the negative forces, the asuras, joined together on a rare occasion to churn the ocean with a mountain to obtain the nectar of immortality they utilized Vasuki, the serpent, as the rope. The devas pulled from one end and the asuras from the other. Lots of precious herbs and gems were produced during the Churning and one of them was a poison (halāhala) which became human karma. This "poison" was so dangerous that none of the devas or asuras wanted to go near it. It was extremely sticky and coming into contact with this poison, i.e., human karma, would drag the divinity down to the realms of human suffering and ego. As everyone else ran away, Lord Siva, followed by Nandi, came forward to help as he was the only one who could counteract this deadly poison. Siva took the poison into his hand and drank it, the descent of the poison was in turn stopped at His throat, by His divine consort. Siva is therefore also known as Nīlakaṇṭha (the blue-throated one) and Viṣakaṇṭha (the poison-throated one). Nandi saw some of the poison spill out of Siva's mouth and immediately drank if off the ground. The devas and asuras watching were shocked and wondered aloud what would happen to Nandi. Lord Siva calmed their fears saying, "Nandi has surrendered into me so completely that he has all my powers and my protection".

MISCELLANEOUS
The white color of the bull symbolizes purity and justice.

Women visit images of Nandi, bringing floral offerings, and touch the stone. Their prayers are for fertility. Additionally, it is also considered a custom among some to whisper the fact of their visit, to that shrine, while requesting the faithful attendant to inform his master of the same.