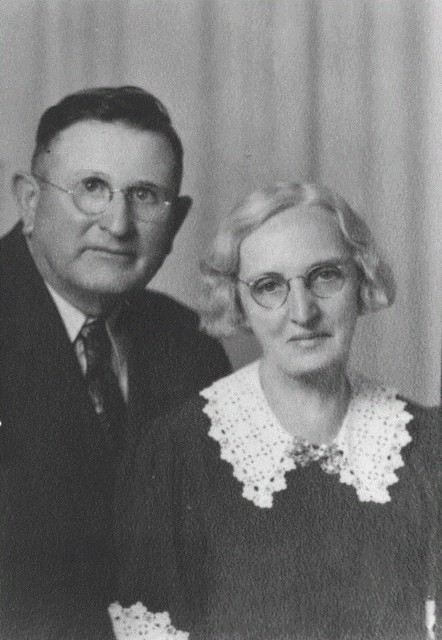 Elva Pearl Hoobler 1886-1944, Married Elmer Dunbar on March 31, 1909
Elva Pearl Hoobler, daughter of Jacob III and Elmira, was born at St. Marys, Kansas Sept. 16, 1886, and died following a brief illness at a hospital in Loup City, Nebraska on May 20, 1944 at the age of 58 years, 3 months, 4 days. At the age of 15, Elva came with her parents to Loup County (in the year 1900) and since that time has lived in Dry Valley in the Moulton community. Elva, as the entire community loved to call her, was educated in the public schools of Kansas and Nebraska, and grew to winsome womanhood, popular and a friend to all her associates. March 31, 1909, Elva Pearl became the bride of Elmer Bruce Dunbar, son of William H. and Sarah L. Dunbar, Nebraska pioneers of 1870. The happy young couple with all the enthusiasm of youth established the new home in western Loup County, where they have since lived, and where six children, four sons and two daughters were born to them. Earl, in the U. S. Armed Forces; Marcus, Oelrich, South Dakota; Arnold, Almeria; Allen in the U. S. Armed Forces; Wilma and Ethel, teachers in Loup County rural schools and both at home. Each of the four sons is married and there are three grandchildren, Judeth, Joyce and Beverly.

In addition to her immediate family, those made sad by her passing are three sisters, Mrs. Estelle Smith, Rosedale, Okla.; Mrs. Myrtie Ramsey, Canadian, Tex.; Mrs. Mabel McCleery, Gem Tex., and five brothers, Ezra, Eureka, Kans.; John of Milburn; George of Sargent; Frank of Broken Bow; Clarence of Canadian, Tex., and many other relatives, as well as a host of friends. Mrs. Dunbar’s father and mother, a brother, William, and a sister Alta Smith, preceded her to that far away country, the Home of the Soul.

Funeral services were held Wednesday afternoon at the Evangelical Church in Taylor. Rev. Smith of the Methodist Church at Sargent officiated. The pallbearers were the four sons and two nephews, Ray and Roy Hoobler. Interment was made in the Moulton Cemetery.

Elmer Bruce Dunbar, son of William and Sarah Austin Dunbar, was born May 8, 1885 in York Co., Neb., and died at the age of 79 years, 6 months, and 28 days at Chadron, Neb. on December 5, 1964. As a small child he moved to west Loup County with his parents. He was educated in the Loup County schools and spent his life farming in that area. On March 31, 1909 he married Elva Pearl Hoobler who preceded him in death in 1944.