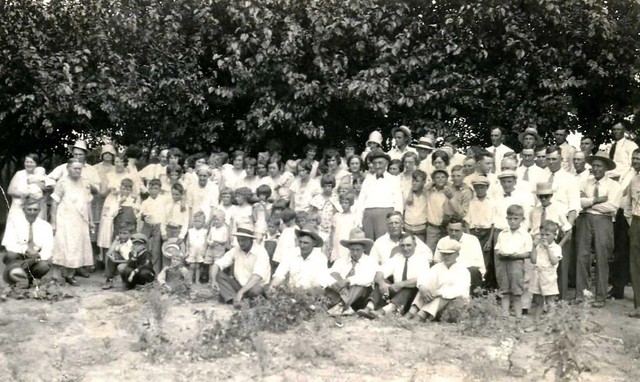 Hoobler Reunion, Gem, Texas 1930
Myrtie Jane Hoobler and John Lewis Ramsey (from Amarillo ) were married in St. Marys , Kansas on April 13, 1896. Their first three children were born there. The oldest was John Jacob, Elmira Elizabeth and Paul Franklin. The family moved to Loup County Nebraska to make their home and three more children were born there. These were Lewis Freel, Ora Melvin and Dorothy Lucille. The family later moved to Fort Collins County . I was born there on April 24, 1914. Shortly after my birth the family left for Texas to be with some of the other relatives, and the trip was made in covered wagons and will arrive at the Hext ranch on the Wasita the day I was 6 months old. The trip had taken two months. In two and one-half years after there were two more arrivals to our family. Margaret Pearl was born on July 17th, 1916 and Carl Snyder came to make his home with us. He was with us until he married Lena Bell and then lived near us the rest of his life.

After staying on the ranch for about five years, we moved into Gem City where dad and the boys farmed. Shortly after that Freel went to the state of Pennsylvania with some cousins and married Ida Lee. They made several trips and lived in Texas and then several years ago the family moved to Arizona and spent the rest of his life there. While at Gem City when I was seven years old we had a house to burn on Friday afternoon and some ladies made we girls clothes to wear to church on Sunday. Then we moved into the old Hotel that was a three-story house. We needed all the rooms, as the family was quite large then. Paul and Francis, Freel and Ida, Dorothy and Preach, Carl and Lena Bell were all there with babies under one year. Also at this time at our community church the revivals were for three weeks and we kept the preachers and we always looked forward to the good singing and preaching.

Paul and Frances lived at Gem and Blue Ridge and had the three children but only Pauline still lives near Frances . They were farmers and ranchers and also Paul was commissioner for several terms, which everyone that knew him knows that was his pride and joy. I think he got to pass away the way he wanted to, serving the public. Frances continued to stay on the place for a few years but now is in Canadian.

After Dad passed away in 1945 Ora and Paul kept the land and lived on there places for a few years then Ora married Helen Bush from Reydon , Oklahoma but she was working on the Alexander Ranch at the time and had one son which is Billy Cannon. They lived on the home place until Ora broke his hip earlier this year and since then they have been in Canadian in their house that they had bought earlier.

Our oldest sister Elmira married John White at Gem and he was a house builder and they lived in Canadian most of their married life but was living in Amarillo near me when they both passed away within two years of each other. They do not have any children living near here now.

Dorothy was married at an early age to Noel (Preach) Walker and had one son George Louis (Buster), and when Buster was four years old Preach passed away after being ill for only one week. Dorothy was a widow for about twelve years then while working at the telephone company she married a man from Miami , O.C. Davis and they have one girl, Lynis Ann Davis Hefner. She and her family live in White Deer and have three sons. Dorothy was in bad health for a few years before her death and Lynis certainly took care of her.

Mother had moved to Canadian after dad passed away and lived in her home until her passing in 1958. Brother Browder that had been a long time preacher in Hemphill and Wheeler counties came back to conduct her funeral.

I married Lois Curlee after meeting him at school at Allison and we were married May 14, 1932 at Wheeler and lived around Allison for a few years. Bobby and Peggy were both born while we were there. They both came back and stayed with their grandparents and finished school there.

Bobby and Carlene George had gone to school together through the years and married when Carlene finished high school. They lived in Canyon and Amarillo for several years then his work transferred them to Georgia and they have made their home there and they love that country. They live in Marietta . They have four children, Lucinda (Curlee) Reyna, Belinda (Curlee) Brousard, Byron J. and Andrea. They have one granddaughter, Meshea that was one year old in October.

After Peggy finished school she came to Amarillo where the rest of us lived and worked at the telephone office with me for a while but she did not like it so she started doing insurance work, which she is still doing. In a short time after coming here Peggy met a fine young man from Canyon by the name of Joe Rogers and then married in 1956 and has three children. Floyd Lee and his son Jeremy live here, as Floyd is field manager for the Pizza Huts in this area. Ronnie Joel, wife and two children live in San Antonio and he is a builder. Holly ( Rogers ) Lamm and husband and baby (Dustin) live in Amarillo also. Joe is a dock foreman for a trucking firm here. Holly’s husband also named Joe is a short haul truck driver. Peggy’s family all belongs to Coulter Road Baptist church where he is a deacon. Lois and I are long time members at South Georgia Baptist church. Our family is quite large now as we have twenty in all.

The (8) children of Myrtie Jane Hoobler and John Ramsey were:

Bertha Mae White was born in 1919. She married Richard Totten in 1939 in Canadian, Hemphill County , TX .

John Thomas White was born in 1940 in Canadian, Hemphill County , TX . He married Linda Whitfield in 1961 in Amarillo , TX .

George Lewis Walker was born in 1927 in Gem, Hemphill County , TX . He married Donna Rogers in 1951 in North Platte , NE.
They had the following children:

Debra Lynis Walker was born in 1955 in North Platte , NE.

They had the following (2) children:

Lucinda Starlene Curlee was born in 1957 in Amarillo , TX .

Mrs. Ramsey Passes Away This Friday Oct. 17, 1958.Mrs. Lewis Ramsey, 80, a resident of Hemphill county for forty five years, passed away at the hospital here this Friday morning at 4:30 after having been critically ill for the past two weeks.

Mrs. Ramsey, who made her home here with her daughter, Mrs. Dorothy Davis, was a member of the First Methodist Church . She was a frail looking little lady but had more energy than most women half her age. To know her was to love her and she leaves a host of friends all over this section to mourn her loss. She loved to visit with her children, grandchildren, other relatives and friends, and was always ready to make a trip at a moment’s notice.

She is survived by the following children: Jake Ramsey of Houston; Paul Ramsey of Gem; Fred Ramsey of Elmira, New York; Ora Ramsey of Gem; Mrs. John White (Elmira) of Amarillo; Mrs. Dorothy Davis of Canadian; Mrs. Lois Curlee (Evelyn) of Amarillo; and Mrs. Brady Hanna (Pearl) of Dumas. Also by Carl Snyder of Gem, who she raised as a son.

Funeral services will be held here this Saturday afternoon at three o’clock at the Methodist church, with the Reverend Browder, of Darrouzett, officiating.

Interment will be made in the local cemetery under the direction of the Stickley funeral home.

From the Tombstones in Canadian Cemetery