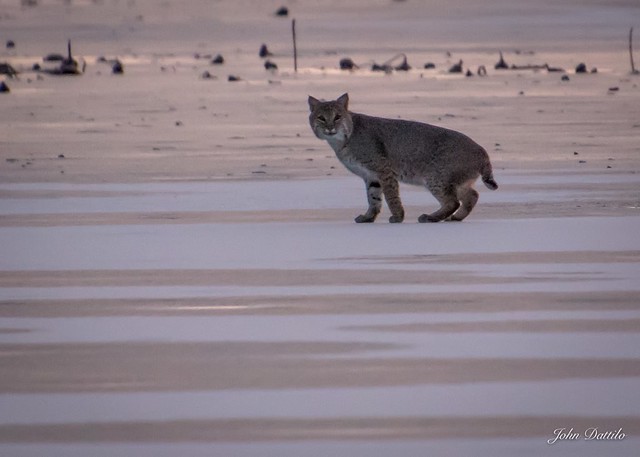 Thursdays blessing
I learned of Muscatatuck NWR from a friend some 4-5 years ago. Prior to this gift, I use to go to Charlestown and Deam Lake State Parks and cruise the back roads of Southern Indiana and Northern Kentucky searching for photographic opportunities. Often returning home with nothing but a depleted camera battery and level of hobby enthusiasm. The discovery of Muscatatuck elevated my obsession to new heights as I often say to others; you never know what you will get at Muscatatuck!

After securing my second retirement, I am now blessed with a job now that allows flexibility in setting my workdays from week to week. When I noticed that the forecast was a low of 20 (a warm up) with partially cloudy skies, I knew the recipe was in place for at least spectacular sunrise. Never knowing if I will be blessed with critters to photograph, the chance of a beautiful sunrise is enough to get me out of bed at zero-dark thirty for the hour long drive.

About two years ago other photographers started sharing photos of Bobcats taken at Muscatatuck. Being a wildlife photographer living in Southern Indiana, a good Bobcat photo is about the equivalent of getting a shot of a unicorn riding on the back of a Wooly Rhinoceros (one mythical, the other extinct)…desired but certainly not expected. The photos I have seen posted basically fall into two distinct categories. The first are the amazing ones that filled my heart with envy of the resulting shot. Most shots however fall into a second category. They are grainy due to low light, out of focus due to grasses or limbs, PSH (photographers shaking hands) and with a few, well you just have to take their word for it that there is a bobcat in there somewhere! Regardless of the photographic results, all were truly blessed to see and be in the presence of such a magnificent creation.

The splendor of daybreak’s colors creeping across the bottoms of the grey clouds is a visual alarm clock that it is time to leave the warmth of my vehicle and find the best position to capture His glory. In this case, it was out on the ice of Richart Lake. With a cautious ear, I took my first steps onto the lake. The absence of popping, cracking and moans and groans indicated the ices depth would hold me, at least for a while. With the sky now exploding with color, I stood there in awe changing settings and clicking away. Half way through my sunrise photo session I decided to lay belly down on the ice to capture a different angle and lighting. After just a few seconds, I started to regret my decision not to wear insulated long-john’s as the tops of my thighs were starting to numb through my jeans.

Now looking much like the classic green plastic toy army man, crawling version, I was keeping one thigh ahead of the other in attempt warm up just a little. Suddenly and without a sound I noticed something at my two o’clock running straight at me in what looked to be a 25% gate. My first thought was that of a dog…then reminding myself of where I was I thought it must be a coyote. Hoping that it would maintain its current gate and angle, I was set up to get some great coyote shots!

A quick equipment assessment left me laying on the ice thinking bad thought as I realized I had five lenses with me and if I were to rate them in the order of what I would want for this shot, I had on lens number three. No time or opportunity to switch, It was going to backlit by the sunrise anyway so I may just get a nice coyote silhouette on the ice…I would get what I get! For the longest time it maintained a head on trajectory as I laid in wait, knowing that I could get skin graphs on my now frozen and numb thighs at a later date. Sacrifices must be made!

As the gap between us closed, I decided to snap off a couple of safety shots. Knowing that the sound of the camera would be amplified across the ice I had to shoot now before it got a whiff of me…or maybe it already had and thought there was a large meal on the ice thus answering why it was trotting directly at me. As the first clicks rang out I reacted as expected. Stopping in place to ascertain the threat it stood off at some 50 yards, staring at black pile of clothing with a shinny eye reflecting back the beauty of the sunrise.

Quickly returning to its previous gate but with a different angle, I could now see its left side in full…it was in fact a big, beautiful, true gift from God adult Bobcat! My hands shook with excitement as my heart beat so hard against the ice I could feel my body move quickly up and down! Thinking that I had surely succumb to a lack of blood flow through my now frozen thighs and was hallucinating…what I was seeing wasn’t allowed to mentally register. Now some thirty yard away I thought I would see if I could get it to stop and look at me. For some odd reason, for as long as I can remember I have made the weird, bigfoot like WOOOOOPPPP sound when I want a critter to stop doing what it is doing and look into my lens. It has worked well on Deer (Whitetail, Black-tail and Mule), Antelope, Moose, Rabbit (regular and Jack), Otter, Coyote, a few bird species, never on Alligator as they show no interest but to kill you…but now I can add Bobcat to the list!

As we both stared in cold silence, I snapped off a few more shots as it disappeared into the darkness of the lake bank. Standing up to get off the ice I stood there in the complete glory of His gift, breathing it in, trying to comprehend what had just happened within the walls of my small human mind. The last time I had seen a Bobcat in the wild was nearly fifty years ago. I have desired that experience daily since. Walking back to the car, to the untrained eye, someone would have seen an appropriately dressed old guy limping from frozen thighs, camera in his hand. If their eyesight was really good they may have picked up on the beautiful blue color of his thumb and index finger tips extending from his photographers gloves. A truly keen eye would have noted a not yet frozen tear in his eye, the type only expelled when comprehending a true blessing. We are blessed that people can’t always see what is going on inside of us. If that were the case they would have seen a child jumping and spinning on lake ice in a Rocky style fashion, his arms high in the air screaming through a smile so big that his face muscles can barely match the brains demand.

A new land speed record between Muscatatuck and my home was established as I just about ran for my Mac to download the shots and see what I captured. As I starter the editing process it became evident that each and every shot was clearly in the second tier of Bobcat photography listed above. The lens I had, the camera setting along with the lack of light and the subject being backlit all added up to providing for a grainy shot. As the slightest feeling of disappointment crept in, it was quickly overcome by the understanding of the event and the pure blessing that it was. There are so many critters out there that I know that I will never get a better shot of, thus being crossed off my bucket list. I am happy that the bobcat remains on my list as a motivation to keep getting out of bed and placing myself in situations where I can be blessed. That is my responsibility; the rest is in God’s hands.