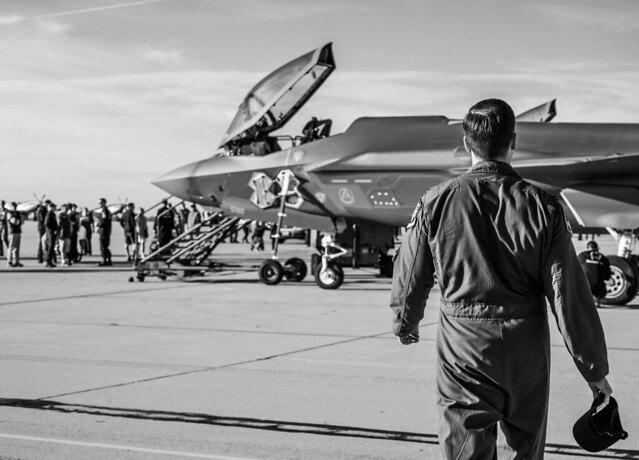 
From Wikipedia, the free encyclopedia

The Lockheed Martin F-35 "Lightning II" is a family of single-seat, single-engine, all-weather, stealth, fifth-generation, multirole combat aircraft, designed for ground-attack and air-superiority missions. It is built by Lockheed Martin and many subcontractors, including Northrop Grumman, Pratt & Whitney, and BAE Systems.

The F-35 has three main models: the conventional takeoff and landing F-35A (CTOL), the short take-off and vertical-landing F-35B (STOVL), and the catapult-assisted take-off but arrested recovery, carrier-based F-35C (CATOBAR). The F-35 descends from the Lockheed Martin X-35, the design that was awarded the Joint Strike Fighter (JSF) program over the competing Boeing X-32. The official "Lightning II" name has proven deeply unpopular and USAF pilots have nicknamed it "Panther", instead.

The United States principally funds F-35 development, with additional funding from other NATO members and close U.S. allies, including the United Kingdom, Italy, Australia, Canada, Norway, Denmark, the Netherlands, and formerly Turkey. These funders generally receive subcontracts to manufacture components for the aircraft; for example, Turkey was the sole supplier of several F-35 parts until its removal from the program in July 2019. Several other countries have ordered, or are considering ordering, the aircraft.

As the largest and most expensive military program ever, the F-35 became the subject of much scrutiny and criticism in the U.S. and in other countries. In 2013 and 2014, critics argued that the plane was "plagued with design flaws", with many blaming the procurement process in which Lockheed was allowed "to design, test, and produce the F-35 all at the same time," instead of identifying and fixing "defects before firing up its production line". By 2014, the program was "$163 billion over budget [and] seven years behind schedule". Critics also contend that the program's high sunk costs and political momentum make it "too big to kill".

The F-35 first flew on 15 December 2006. In July 2015, the United States Marines declared its first squadron of F-35B fighters ready for deployment. However, the DOD-based durability testing indicated the service life of early-production F-35B aircraft is well under the expected 8,000 flight hours, and may be as low as 2,100 flight hours. Lot 9 and later aircraft include design changes but service life testing has yet to occur. The U.S. Air Force declared its first squadron of F-35As ready for deployment in August 2016. The U.S. Navy declared its first F-35Cs ready in February 2019. In 2018, the F-35 made its combat debut with the Israeli Air Force.

The U.S. stated plan is to buy 2,663 F-35s, which will provide the bulk of the crewed tactical airpower of the U.S. Air Force, Navy, and Marine Corps in coming decades. Deliveries of the F-35 for the U.S. military are scheduled until 2037 with a projected service life up to 2070.

The F-35 was developed to replace most US fighter jets with the variants of a single design that would be common to all branches of the military. It was developed in co-operation with a number of foreign partners, and, unlike the F-22
"Raptor", intended to be available for export. Three variants were designed: the F-35A (CTOL), the F-35B (STOVL), and the F-35C (CATOBAR). Despite being intended to share most of their parts to reduce costs and improve maintenance logistics, by 2017, the effective commonality was only 20%. The program received considerable criticism for cost overruns during development and for the total projected cost of the program over the lifetime of the jets.

By 2017, the program was expected to cost $406.5 billion over its lifetime (i.e. until 2070) for acquisition of the jets, and an additional $1.1 trillion for operations and maintenance. A number of design deficiencies were alleged, such as: carrying a small internal payload; performance inferior to the aircraft being replaced, particularly the F-16; lack of safety in relying on a single engine; and flaws such as the vulnerability of the fuel tank to fire and the propensity for transonic roll-off (wing drop). The possible obsolescence of stealth technology was also criticized.

Although several experimental designs have been developed since the 1960s, such as the unsuccessful Rockwell XFV-12, the F-35B is to be the first operational supersonic STOVL stealth fighter. The single-engine F-35 resembles the larger twin-engined Lockheed Martin F-22 "Raptor", drawing design elements from it. The exhaust duct design was inspired by the General Dynamics Model 200, proposed for a 1972 supersonic VTOL fighter requirement for the Sea Control Ship.

Lockheed Martin has suggested that the F-35 could replace the USAF's F-15C/D fighters in the air-superiority role and the F-15E "Strike Eagle" in the ground-attack role. It has also stated the F-35 is intended to have close- and long-range air-to-air capability second only to that of the F-22 "Raptor", and that the F-35 has an advantage over the F-22 in basing flexibility and possesses "advanced sensors and information fusion".

Testifying before the House Appropriations Committee on 25 March 2009, acquisition deputy to the assistant secretary of the Air Force, Lt. Gen. Mark D. "Shack" Shackelford, stated that the F-35 is designed to be America's "premier surface-to-air missile killer, and is uniquely equipped for this mission with cutting-edge processing power, synthetic aperture radar integration techniques, and advanced target recognition".

Durable, low-maintenance stealth technology, using structural fiber mat instead of the high-maintenance coatings of legacy stealth platforms
Integrated avionics and sensor fusion that combine information from off- and on-board sensors to increase the pilot's situational awareness and improve target identification and weapon delivery, and to relay information quickly to other command and control (C2) nodes
High-speed data networking including IEEE 1394b and Fibre Channel (Fibre Channel is also used on Boeing's Super Hornet.
The Autonomic Logistics Global Sustainment, Autonomic Logistics Information System (ALIS), and Computerized maintenance management system to help ensure the aircraft can remain operational with minimal maintenance manpower The Pentagon has moved to open up the competitive bidding by other companies. This was after Lockheed Martin stated that instead of costing 20% less than the F-16 per flight hour, the F-35 would actually cost 12% more. Though the ALGS is intended to reduce maintenance costs, the company disagrees with including the cost of this system in the aircraft ownership calculations. The USMC has implemented a workaround for a cyber vulnerability in the system. The ALIS system currently requires a shipping-container load of servers to run, but Lockheed is working on a more portable version to support the Marines' expeditionary operations.
Electro-hydrostatic actuators run by a power-by-wire flight-control system
A modern and updated flight simulator, which may be used for a greater fraction of pilot training to reduce the costly flight hours of the actual aircraft
Lightweight, powerful lithium-ion batteries to provide power to run the control surfaces in an emergency
Structural composites in the F-35 are 35% of the airframe weight (up from 25% in the F-22). The majority of these are bismaleimide and composite epoxy materials. The F-35 will be the first mass-produced aircraft to include structural nanocomposites, namely carbon nanotube-reinforced epoxy. Experience of the F-22's problems with corrosion led to the F-35 using a gap filler that causes less galvanic corrosion to the airframe's skin, designed with fewer gaps requiring filler and implementing better drainage. The relatively short 35-foot wingspan of the A and B variants is set by the F-35B's requirement to fit inside the Navy's current amphibious assault ship parking area and elevators; the F-35C's longer wing is considered to be more fuel efficient.

Costs
A U.S. Navy study found that the F-35 will cost 30 to 40% more to maintain than current jet fighters, not accounting for inflation over the F-35's operational lifetime. A Pentagon study concluded a $1 trillion maintenance cost for the entire fleet over its lifespan, not accounting for inflation. The F-35 program office found that as of January 2014, costs for the F-35 fleet over a 53-year lifecycle was $857 billion. Costs for the fighter have been dropping and accounted for the 22 percent life cycle drop since 2010. Lockheed stated that by 2019, pricing for the fifth-generation aircraft will be less than fourth-generation fighters. An F-35A in 2019 is expected to cost $85 million per unit complete with engines and full mission systems, inflation adjusted from $75 million in December 2013.
Tags: more » « less
Camera: Nikon Z 6, f/7.1, 1/800 sec, 59mm, ISO 400 (more info) (hide info)
Stats: 1,951 views / 1 comment 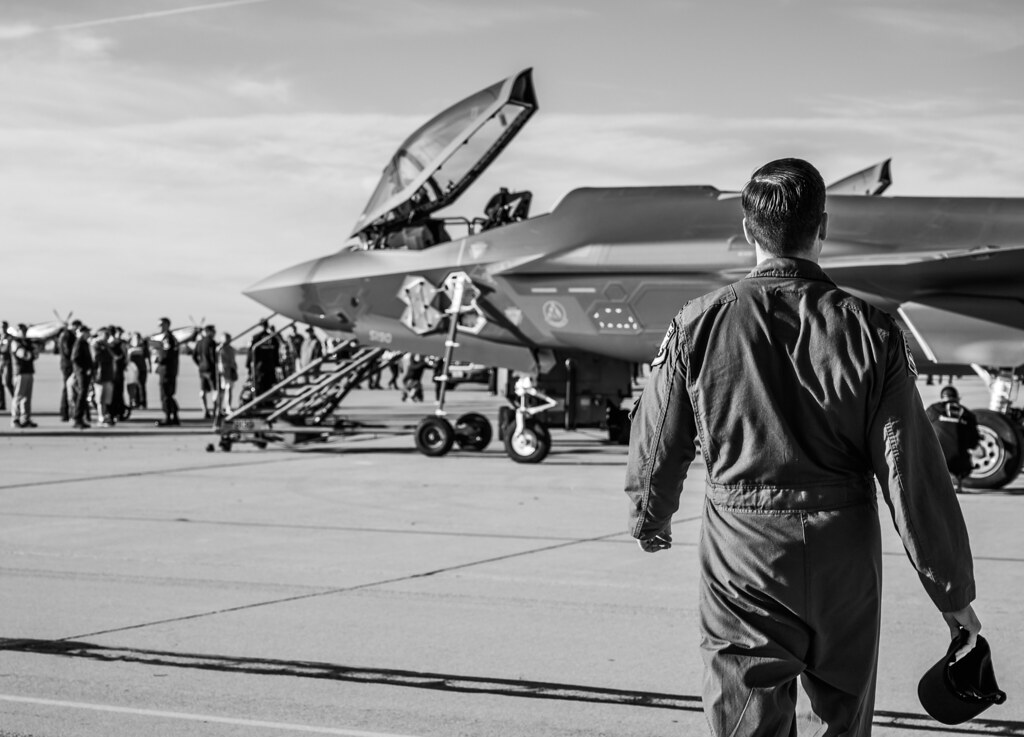