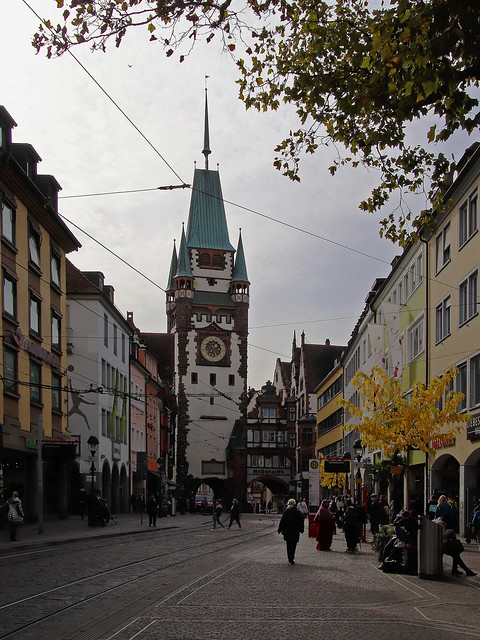 The Martinstor is a part of the former city fortification and also the older one of the two remaining city gates of Freiburg im Breisgau. According to dendrochronological research, the wooden beams date back to the year 1202. However, the gate was first mentioned in a document in 1238 as "Porta Sancti Martini". From the 17th Century on, the side of the gate facing the city was decorated with a picture of Martin of Tours.

In 1901, the gate underwent a huge change. By this point, the surrounding buildings had surmounted the old city gate and the old passageway had become too small for the new tram infrastructure. Having momentarily considered demolition, the city council opted instead to modify the building. Hence, the tower was heightened from 22 to 60 metres and a new roof construction in the architectural style of the 15th century was added. Furthermore, an additional gate with a larger thoroughfare, designed in the same architectural style, was erected next to the original gate. Today, the Martinstor is still of Freiburg’s best known landmarks.

If you look closely, you can see that there’s a McDonald’s restaurant above the additional gate to the right of the tower. Not to interfere with the overall architectural impression, the McDonald’s group was prohibited to attach its logo there. Hence, it’s one of just a few McDonald’s restaurants in the world without McDonald’s well-known "Golden M".

Freiburg im Breisgau, commonly referred to as Freiburg, is an independent city in the German state of Baden-Württemberg. With a population of about 230,000, it is the fourth largest city in Baden-Württemberg after Stuttgart, Karlsruhe, and Mannheim. The town is located in the very southwest of Germany, in the tri-state-area near the French and Swiss border. It is also situated on the southwestern edge of the Black Forest and traversed by the Dreisam River.

Freiburg is a famous old German university town and archiepiscopal seat. It was founded by Konrad and Duke Berthold III of Zaehringen in 1120 as a free market town. This town was strategically located at a junction of trade routes between the Mediterranean Sea and the North Sea regions, as well as the Rhine and Danube rivers. In 1200, Freiburg's population numbered approximately 6,000 people. At about that time, under the rule of Bertold V, the last duke of Zaehringen, the city began construction of its Freiburg Minster on the site of an older parish church.

At the end of the thirteenth century there was a feud between the citizens of Freiburg and their lord, Count Egino II of Freiburg. Egino II raised taxes and sought to limit the citizens' freedom, after which the locals used catapults to destroy the count's castle atop the Schlossberg (in English: "Castle Hill"), a hill that overlooks the city centre. The furious count called on his brother-in-law the Bishop of Strasbourg, Konradius von Lichtenberg, for help, who responded by marching with his army to Freiburg.

According to an old Freiburg legend, a butcher named Hauri stabbed the Bishop of Strasbourg to death. But it was a Pyrrhic victory, since henceforth the citizens of Freiburg had to pay an annual expiation of 300 marks in silver to the count of Freiburg until 1368. In that year the citizens were fed up with their lords, and the town purchased its independence from them. Freiburg turned itself over to the protection of the Habsburg dynasty, which allowed the city to retain a large measure of freedom.

The silver mines in the neighbourhood of Freiburg provided an important source of capital for the town and the silver even made Freiburg one of the richest cities in Europe. In 1377, the cities of Freiburg, Basel, Colmar, and Breisach entered into a monetary alliance known as the Rappenpfennig Collective. This alliance facilitated commerce among the cities and lasted until the end of the 16th century.

In 1457, Albrecht VI, Regent of Further Austria, established the Albert-Ludwigs-Universität, one of Germany's oldest universities. In 1520, Freiburg decided not to take part in the Reformation and became an important centre for Catholicism on the Upper Rhine. Erasmus of Rotterdam moved here after Basel had accepted the Reformation. Being in need of finding a scapegoat for calamities such as the Black Plague, the city became a centre of witch-hunt in the 16th century.

The 17th, 18th, and 19th centuries were turbulent times for Freiburg: At the beginning of the Thirty Years' War, Freiburg had 10,000 to 14,000 residents, but by its end only 2,000 remained. During this war and other conflicts, the city belonged at various times to the Austrians, the French, the Swedes, the Spaniards, and various members of the German Confederation.

Between 1648 and 1805, when the city was not under French occupation it was the administrative headquarters of Further Austria, the Habsburg territories in the southwest of Germany. In 1805, the city, together with the Breisgau and Ortenau areas, finally became part of Baden. In 1827, when the Archdiocese of Freiburg was founded, Freiburg became the seat of a Catholic archbishop. 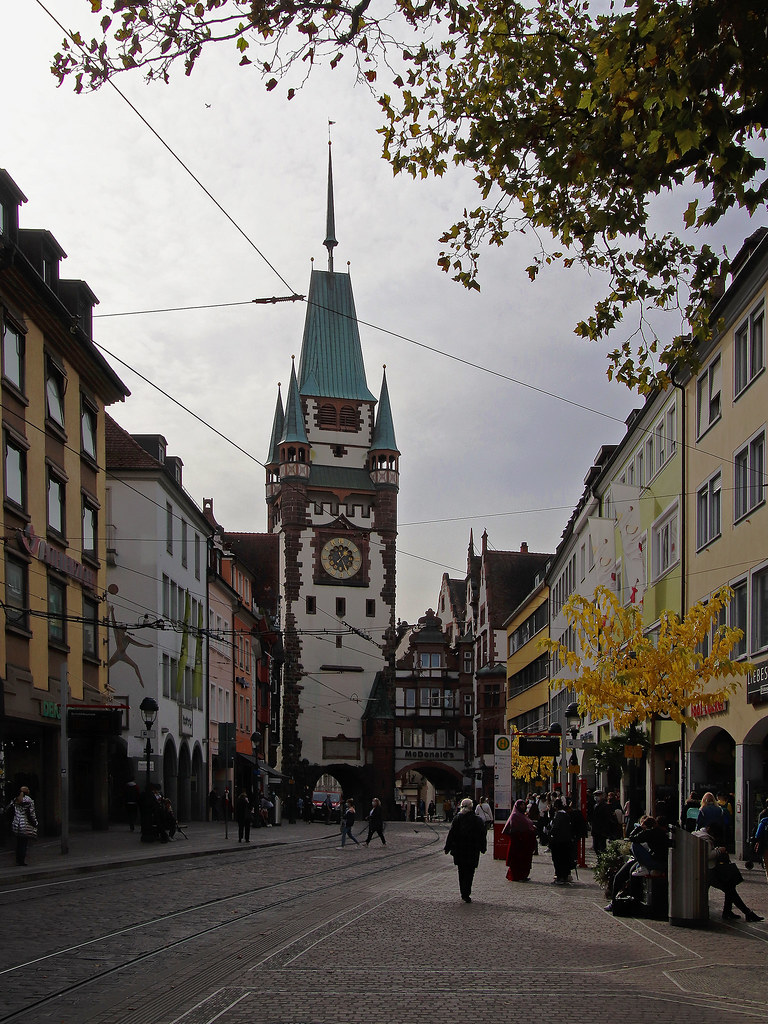 preview: Remodeled to impress on Flickriver