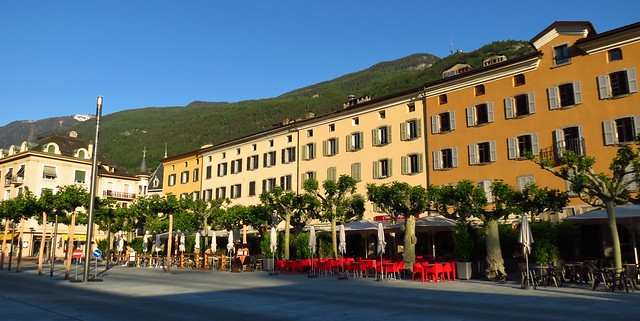 Switzerland's first modern square, designed in 1819, built mainly between 1820 and 1914, the Place Centrale, called Grande Place until 1899, is today one of the strong symbols of the City of Martigny.

Its creation took place the day after the glacial debacle of Giétroz (06.16.1818). It was the work of a family and political clan from which emerges the extraordinary personality of Philippe Morand (1773-1856). A political and commercial pioneer, this Savoyard, who arrived in Martigny at the age of 22, immediately seized the opportunity offered by this disaster, being charged by the Municipality to rebuild the district of the City. Associated with his two brothers-in-law, he skillfully negotiates the purchase of the large devastated orchard from the family of Kalbermatten de Sion, owner of the Auberge de la Grand'Maison, arguing that the land in question will be intended for a public place and to the beautification of the City district. The deed of sale was signed on December 23, 1818 for the sum of 3,360 Swiss francs.

Philippe Morand's project? Create a place symbolizing the community of the time, that of Grand Martigny. Believing in the sacred union of the plain and the mountain, in the omnipotence of civilization, open to a certain idea of emerging freedom, he dreams of a place that reflects these values and becomes a real center of commerce regional. If the municipal authorities will be informed of this purchase in June 1819 only, they enact the same year a schedule of conditions registering in priority the symmetry and the unit as principles. Two houses will be built to the north and south of the square by the brothers-in-law of said Morand and will serve as a prototype: on the north side, this is building n ° 8 (Maison Joseph Félix Piotaz 1821-1822), the work of a Piedmontese mason; south side, of building no .3-5 (Maison Robatel, then Ducrey, 1832-1833). These buildings illustrate in particular the principle of public arcades on the ground floor which must remain free so that the population can walk around and take shelter.

However, the completion of the Grande Place proved to be difficult: in about fifteen years, only four houses were erected. Philippe Morand's dream comes face to face with reality: the inhabitants' lack of resources and the break-up of Grand Martigny. Although Regulation 1819 no longer applied since the middle of the XIX th century, the buildings are struggling to raise and instead appears still incomplete in 1914 on the side of the road to the Great Saint Bernard; it was not until 1930 to see the completion of the "built perimeter" delimiting the Place Centrale. Despite everything, it is clear that the buildings built in 1890 imitate the first houses, which gives the whole a certain architectural coherence.

Crossed by a milling throughout the XIX th century, the Grand Place, yet designed in 1818 without trees in the manner of a true forum, is being decorated in 1861 of its 154 plane trees, from Ardèche (France) for a total of 308 francs , plus 58 ct. per tree for transport. Countless improvements will follow, including: the inauguration in 1876 of the statue of Gustave Courbet, sometimes called Helvetia, sometimes Liberty, transferred since in the district of Plaisance; the embellishment of the top of the square with a fountain in the 1880s; the installation of a meteorological column by the Société pour le développement de Martigny in 1906. From that date and until 1956, the Place Centrale became the place of passage for the tram then connecting Martigny-Ville station to Martigny-Bourg. Note also that the bandstand, built in 1912 and project of the architect C. Besson (1869-1944), was moved to the old meadow Ganioz during the renovation of 2010-2012 at the end of an architecture competition and a participatory citizen approach.

Over the course of its successive redevelopments, this emblematic square - disproportionate for its time - has become the heart of Martigny. Among the first public places of Switzerland in the XIX th century, the Central Square is still today a privileged place of conviviality, meetings and intercultural exchange, the image of his city Martigny.
© All Rights Reserved
Taken in: Switzerland / Valais / Martigny / Martigny-Ville  (show maphide map)
Tags:
Sets appears in:
Camera: Canon PowerShot SX40 HS, f/4.0, 1/500 sec, 4.3mm, ISO 100 (more info) (hide info)
Stats: 4,029 views / 38 comments
↑ top