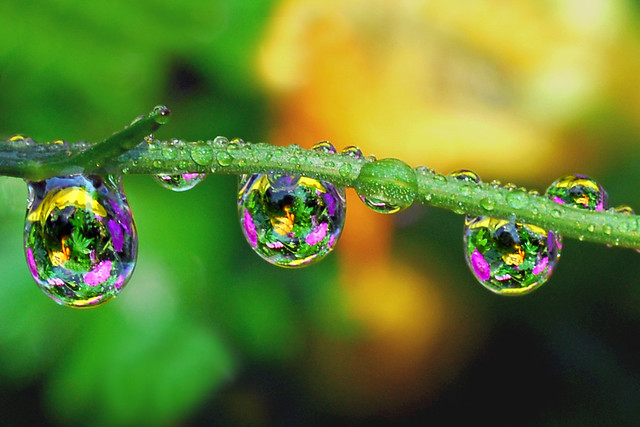 How to put pretty stuff in those drops. Tutorial below:
Water Drop Photography Tutorial

Or how to squeeze flowers into those teeny-weenie drops


I have always been drawn to nature and wildlife photography. I love taking my camera way up north to capture images of seldom-seen animals and exotic scenery. Unfortunately, we can’t always plan distant adventures to shoot photographs of moose and northern lights. But we can train our eyes to find the unexpected beauty in our own backyards.

My fascination (some might call it an obsession) with water drops began when I bought a Nikon D200 last summer. Sadly, the lens I wanted was out of stock. There was no way I was going to just look at my camera body while I waited, so I picked up a Nikkor 60mm macro. Through that lens I discovered worlds of complexity hidden within the simplest tiny drops of water.

I’m often asked if the images inside the water drops are real or the product of Photoshop. Let me assure you they are real, and anyone can find them if they know how to look. Simple physics produces these tiny, beautiful and common images. Water is cohesive, it naturally bonds together in the shape of a sphere, and in that shape it functions as a miniature lens that will refract nearby objects. Using that organic lens as seen through your technological lens, will allow you to explore those tiny, complex worlds.

The water drop photos on my stream have been the result of an evolutional process. My most viewed, most faved and most interesting photo (according to flickr) was taken almost by luck, lying flat on my belly using a Diet Coke can as tripod. But after a great deal of trial and error, I’ve come up with a few simple, consistent steps for more easily creating a water drop photograph.

1. Focus: No, that's not a typo; focus is listed twice, and for a very good reason. It’s necessary to consider the focus of the water drop itself as well as the focus of the subject displayed within the drop. My initial concern is the water drop itself and the plant on which the drop is located. I like to set my camera to aperture priority to control the depth of field. The trick is to have enough depth of field so the drop and the plant (and maybe some nearby drops) are all in focus, while leaving the background sufficiently blurred so it doesn't compete for attention. I generally use f8 to f10 but I’ll sometimes stop down to f18 if the background does not need as much blur. I also find I get a sharper focus by backing away just a little and cropping the photo, rather than getting as close as possible in an attempt to get maximum magnification.

2. Focus: As seen in the example above, the water drop is in focus as is the image of the flower seen through the water drop, but the flower itself is not in focus. That effect is achieved not by adjusting the camera, but by relying on the water drop to act as a fixed focal lens. In other words, instead of adjusting the camera I adjust the object I want to appear within the water drop. I simply move it back or forward until I've found the clarity of focus I want. Some photos look better with blurred refractions. For the greatest clarity I've found the object should be 3-4 inches behind the water drop. This, of course, may vary if using a different macro lens. Be sure to experiment.

3. Composition: Obviously, the guidelines for good composition apply to water drop photographs. Attention should be given to the Rule of Thirds, to simplicity, to the geometry within the frame, and to all the usual elements of visual composition. It's important to remember, though, when photographing water drops that the very shape of the drop influences compositional decisions. Since the lens of the water drop is spherical (or nearly so), slight adjustments in the camera position…left, right, up, down…can have a radical effect on what is seen within the drop. Again, experiment.

4. Background: If you're working from nature, your control over the background is necessarily limited. You have to work with what you've got. As mentioned earlier, the unique qualities of the organic lens formed by a drop of water allows you to make minor adjustments in the camera position that will have a profound effect on what's seen within the drop. With a few simple props, you can gain better control over the background. For example, I often rely on a large sheet of insulation, which is bright blue on one side. I originally used it to block the wind, but noticed that even on the dreariest of days it can mimic a perfect azure sky.

Other Considerations: Almost every time I set out to take photographs of water drops, I learned something new. There was always some new factor to consider. I learned, for example, I could get bigger, more cohesive and more interesting drops on humid days. I discovered that even the slightest wind could have disastrous effects on macro focusing, as well as on the water drops themselves. I found that very slightly adjusting the exposure (-0.3EV to –0.7EV) would compensate for the natural sheen of the surface of the water drop, keeping it from being somewhat burnt out. Most important, I had to teach myself to remember that because a water drop acts as an organic lens, it presents everything upside down and in reverse (just like a pinhole camera or a large format camera).

So now I’m one of the few people who looks forward to really still, stifling, humid days. And even though my beautiful Nikkor 18-200mm has arrived, I still have my macro on more than half the time. Water drop photos are not only real, but also addicting to try to master.

That's it. That's how it's done. It's as simple as learning how chess pieces move, and just as complex as a game of chess. Good luck and think small. preview: How to put pretty stuff in those drops. Tutorial below: on Flickriver