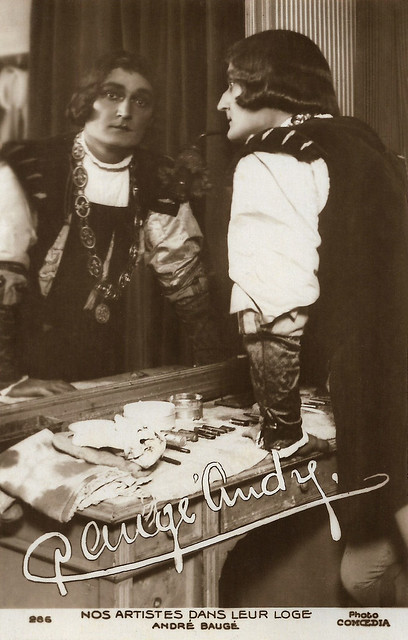 André Gaston Baugé was born in Toulouse, France, in 1893. He was the son of Alphonse Baugé, a vocal teacher, and Anna Tariol-Baugé a soprano active in operetta. André studied with his parents and appeared in the French provinces billed as André Grilland. However, he also painted and had an exhibition at the Salons de la Société des Artistes Français. He decided to choose for the operetta, like his mother. In 1917, he made his debut as first baritone at the Opéra-Comique in Paris as Frédéric in Lakmé. A pensionnaire at the Opéra-Comique until 1925, he appeared as Clément Marot in La Basoche, Sylvanus in Au Beau Jardin de France, Figaro in Le Barbier de Séville, Escamillo in Carmen, Alfio in Cavalleria Rusticana, Don Giovanni, Clavaroche in Fortunio, Lescaut in Manon, the title role in Mârouf, savetier du Caire, Ourrias in Mireille, Jean in Les noces de Jeannette, Silvio in Paillasse, Pelléas, d’Orbel in La Traviata, Marcel in La boheme, and Albert in Werther. Baugé sang in the first performances at the Salle Favart of Béatrice, Masques et Bergamasques and Véronique. In 1925 he played Germont in Traviata and the title role in Mârouf. In 1925 he sang in the French premiere of Monsieur Beaucaire and moved into the field of comédie musicale and Viennese operetta. A succession of appearances in that genre followed: Venise (alongside his mother) in 1927, Paganini in 1928, Vouvray in 1929 (for which he wrote the text), Le Clown amoureux in 1929, Robert le Pirate in 1929, Cinésonor in 1930 (also writing the text), Nina-Rosa in 1931, Valses de Vienne in 1933, Au temps des Merveilleuses in 1934, Au soleil du Mexique in 1935 and Le Chant du tzigane in 1937.

In the cinema, André Baugé made his debut in the silent film La fleur des Indes/The Flower of the Indies (Théo Bergerat, 1921) starring Huguette Duflos. Nine years later he appeared in La Route est belle (Robert Florey, 1930), one of the first French sound films with music by Szulc. As no French studios had been converted for sound film, it was shot at Elstree Studios in Britain. In Germany he starred opposite Liane Haid and Willi Forst in Petit officier... Adieu! (Géza von Bolváry, 1930), an alternate-language version of the operetta Das Lied ist aus (Géza von Bolváry, 1930). Multiple-language versions were common in the years following the introduction of sound film, before the practice of dubbing became widespread. The next year, he had a supporting part in another example, Le petit café/The Little Cafe (Ludwig Berger, 1931), a French-language American Pre-Code musical film starring Maurice Chevalier. The film is a foreign-language version of Playboy of Paris (Ludwig Berger, 1930). The film received a better reception from critics than the English-language version had. In the following years, he appeared in some other films including the opera adaptation Le barbier de Séville/The Barber of Seville (Hubert Bourlon, Jean Kemm, 1936), and Le roman d'un jeune homme pauvre/The novel of a young poor man (Abel Gance, 1935) featuring Pierre Fresnais,. Then he returned to the theatre. He also contributed to the books of several productions (Vouvray, Cinésonor) he designed the cover for the score of Venise by Richepin. He was for a time the director of the Trianon-Lyrique in Paris. Baugé was the author of the libretto of an opéra-bouffe in three acts entitled tableaux Beaumarchais, using Rossini's music arranged by Eugène Cools (1877-1936), which was premiered at the Théâtre des Variétés in Marseille in 1931. After the war he taught at the École Normale, returning to the theatre in 1958 as Johann Strauss senior in Valses de Vienne. He left recordings of songs from many of his roles, and some of these have been re-issued on CD. André Baugé died in 1966 in Clichy-la-Garenne, France. He was 73. His wife was the singer Suzanna Laydeker, who also appeared as Laydeker-Baugé. She died in 1980. 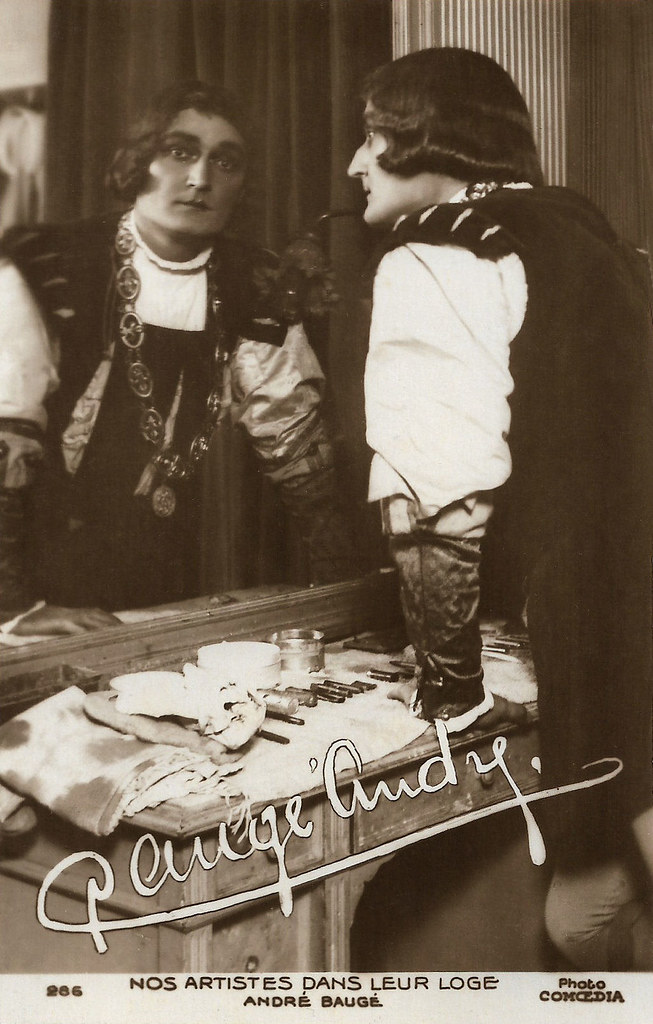