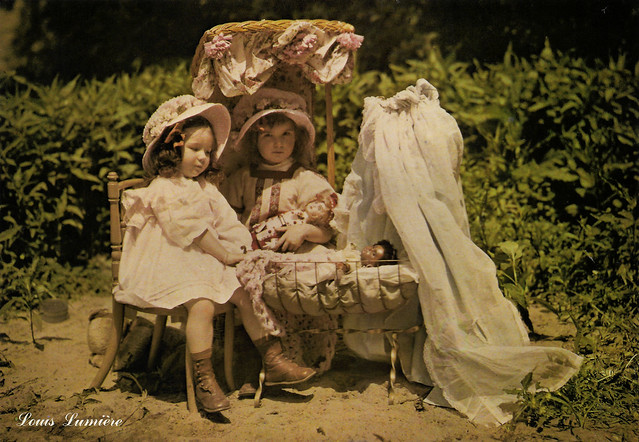 The Autochrome Lumière was an early color photography process patented in 1903 by the Lumière brothers in France and first marketed in 1907. Autochrome was an additive color "mosaic screen plate" process. It was the principal colour photography process in use before the advent of subtractive colour film in the mid-1930s. Prior to the Lumiere brothers, Louis Ducos du Hauron utilized the separation technique to create colour images on paper with screen plates, producing natural colours through superimposition, which would become the foundation of all commercial colour photography. Descendants of photographer Antoine Lumiere, inventors Louis and Auguste Lumiere utilised Du Hauron's (1869) technique, which had already been improved upon by other inventors such as John Joly (1894) and James William McDonough (1896), making it possible to print photographic images in colour. One of the most broadly used form of colour photography in the early twentieth century, autochrome was recognized for its aesthetic appeal.

Autochrome is an additive color "mosaic screen plate" process. The medium consists of a glass plate coated on one side with a random mosaic of microscopic grains of potato starch dyed red-orange, green, and blue-violet (an unusual but functional variant of the standard red, green, and blue additive colors); the grains of starch act as color filters. Lampblack fills the spaces between grains, and a black-and-white panchromatic silver halide emulsion is coated on top of the filter layer. Unlike ordinary black-and-white plates, the Autochrome was loaded into the camera with the bare glass side facing the lens so that the light passed through the mosaic filter layer before reaching the emulsion. The use of an additional special orange-yellow filter in the camera was required to block ultraviolet light and restrain the effects of violet and blue light, parts of the spectrum to which the emulsion was overly sensitive. Because of the light loss due to all the filtering, Autochrome plates required much longer exposures than black-and-white plates and films, which meant that a tripod or other stand had to be used and that it was not practical to photograph moving subjects.[8] The plate was reversal-processed into a positive transparency — that is, the plate was first developed into a negative image but not "fixed", then the silver forming the negative image was chemically removed, then the remaining silver halide was exposed to light and developed, producing a positive image. The luminance filter (silver halide layer) and the mosaic chrominance filter (the colored potato starch grain layer) remained precisely aligned and were distributed together, so that light was filtered in situ. Each starch grain remained in alignment with the corresponding microscopic area of silver halide emulsion coated over it. When the finished image was viewed by transmitted light, each bit of the silver image acted as a micro-filter, allowing more or less light to pass through the corresponding colored starch grain, recreating the original proportions of the three colors. At normal viewing distances, the light coming through the individual grains blended together in the eye, reconstructing the color of the light photographed through the filter grains.

To create the Autochrome color filter mosaic, a thin glass plate was first coated with a transparent adhesive layer. The dyed starch grains were graded to between 5 and 10 micrometers in size and the three colors were thoroughly intermingled in proportions which made the mixture appear gray to the unaided eye. They were then spread onto the adhesive, creating a layer with approximately 4,000,000 grains per square inch but only one grain thick. The exact means by which significant gaps and overlapping grains were avoided still remains unclear. It was found that the application of extreme pressure would produce a mosaic that more efficiently transmitted light to the emulsion, because the grains would be flattened slightly, making them more transparent, and pressed into more intimate contact with each other, reducing wasted space between them. As it was impractical to apply such pressure to the entire plate all at once, a steamroller approach was used which flattened only one very small area at a time. Lampblack was used to block up the slight spaces that remained. The plate was then coated with shellac to protect the moisture-vulnerable grains and dyes from the water-based gelatin emulsion, which was coated onto the plate after the shellac had dried. The resulting finished plate was cut up into smaller plates of the desired size, which were packaged in boxes of four. Each plate was accompanied by a thin piece of cardboard colored black on the side facing the emulsion. This was to be retained when loading and exposing the plate and served both to protect the delicate emulsion and to inhibit halation. The 1906 U.S. patent describes the process more generally: the grains can be orange, violet, and green, or red, yellow, and blue (or "any number of colors"), optionally with black powder filling the gaps. Experimentations within the early twentieth century provided solutions to many issues, including the addition of screen plates, a yellow filter designed to balance the blue, and adjustments to the size of the silver halide crystals to allow for a broader spectrum of colour and control over the frequency of light.

Because the presence of the mosaic color screen made the finished Autochrome image very dark overall, bright light and special viewing arrangements were needed for satisfactory results. Stereoscopic Autochromes were especially popular, the combined color and depth proving to be a bewitching experience to early 20th Century eyes. Usually of a small size, they were most commonly viewed in a small hand-held box-type stereoscope. Larger, non-stereoscopic plates were most commonly displayed in a diascope, which was a folding case with the Autochrome image and a ground glass diffuser fitted into an opening on one side, and a mirror framed into the other side. The user would place the diascope near a window or other light source so that light passed through the diffuser and the Autochrome, and the resulting back-lit, dark-surrounded image would be viewed in the mirror. Slide projectors, then known as magic lanterns and stereopticons, were a less common but especially effective display technique, more suitable for public exhibitions. Unfortunately, projection required an extremely bright and therefore hot light source (a carbon arc or a 500 watt bulb were typical) and could visibly "fry" the plate if continued for more than two or three minutes, causing serious damage to the color.[10] More than a few surviving Autochromes suffer from such "tanning" and conventional projection is not a recommended means of displaying these irreplaceable images today. However, a projector-like optical system (i.e., using condenser lenses for illumination, with a viewing lens in place of the projection lens), employing daylight (not direct sunlight) for the light source, can produce comparably excellent visual results—although for only one viewer at a time—without the unacceptable hazards of actual projection. The use of a "light box" or similar highly diffused artificial light source for viewing Autochromes, although now nearly universal, is unfortunate, as the heavy scattering of light within and among the several layers of coatings on the plate degrades the color saturation. The slight pinkish tinge caused by colloidal scattering (the effect seen through a glass of water into which a couple of drops of milk have been mixed) is exacerbated, and the use of artificial light—especially fluorescent light—upsets the color rendition of a system which the Lumière Brothers carefully balanced for use with natural daylight.

Autochromes continued to be produced as glass plates into the 1930s, when film-based versions were introduced, first Lumière Filmcolor sheet film in 1931, then Lumicolor roll film in 1933. Although these soon completely replaced glass plate Autochromes, their triumph was short-lived, as Kodak and Agfa soon began to produce multi-layer subtractive color films (Kodachrome and Agfacolor Neu respectively). Nevertheless, the Lumière products had a devoted following, above all in France, and their use persisted long after modern color films had become available. The final version, Alticolor, was introduced in 1952 and discontinued in 1955, marking the end of the nearly fifty-year-long public life of the Autochrome. 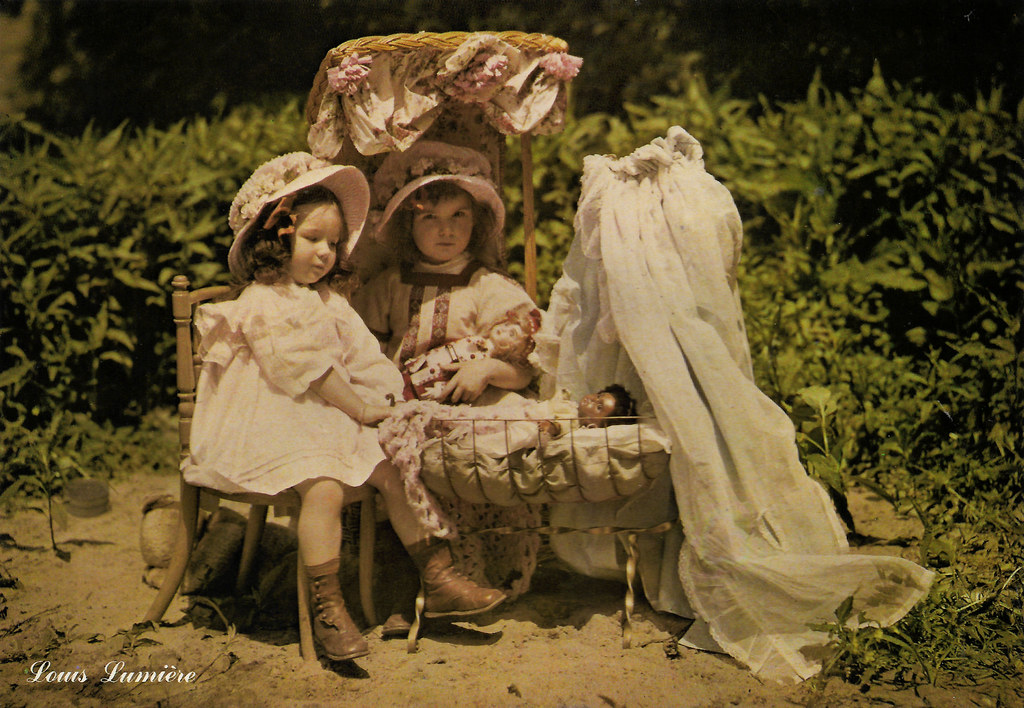 preview: The Lumière brothers on Flickriver