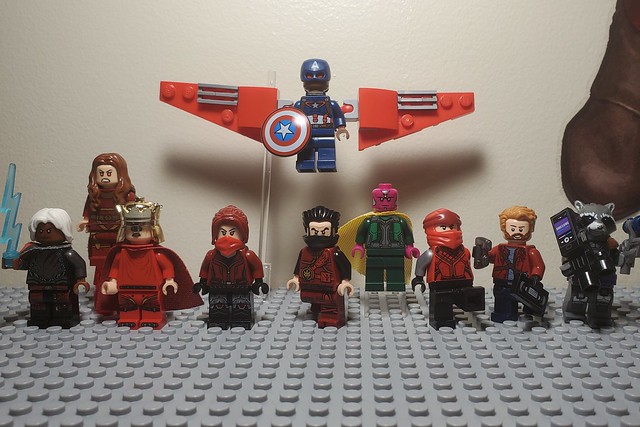 House of M
This is my entry into That Lego Guy's contest. The story is as follows:

(This is a different story from the comics, just the same name)

In 2016, Mutants Magneto and Charles Xavier founded the Brotherhood of Mutants. It was founded to protect mutants who were hated by society and train them to protect themselves. The first student was nicknamed Storm. She and Magneto began dating shortly after they met. In 2019, The Avengers realized that the Brotherhood may be a threat, after killing 46 people while protecting a group of Mutants. Charles tried to convince the avengers they had good intentions and ended up joining them. That night, Magneto murdered Charles. He then led the brotherhood, reforming them into the House of M. They began to conquer the world, believing mutantkind was superior. They killed many of the avengers. Magneto and Storm married. They adopted children from their home in Genosha, Pietro and Wanda. They were both mutants. The House had a team called the X-Men, named after Xavier, who Magneto claims was killed by Tony Stark. The team is led by Wanda, The Scarlet Witch and her brother Quicksilver. It also had Cyclops, Rogue, Dark Phoenix, and Juggernaut. Magneto also joined with Emma Frost, who is set on conquering not just Earth, but the Galaxy.

The Avengers:
Most of the Avengers were killed by the X-Men. The two leaders, Captain America and Iron Man were killed by Magneto himself. Hulk went into hiding. Years later, in 2027, a mutant who doesn't support the House of M, leads a new team. His name is Wolverine. He hired Ms. Marvel, Hawkeye, Star-Lord, Spider-Man, Ant Man, Black Panther, Shang-Chi, and a new Captain America, Sam Wilson. Also, They got an elderly Hank Pym to create a Synthiod named Vision to ease The Scarlet Witch into joining the Avengers.

The Guardians:
Formerly the Guardians of the Galaxy, they now vow to stop Emma Frost from conquering the galaxy. Only in 2024, she killed most of the lineup (Star-Lord, Rocket, Drax, Gamora, Agent Venom, Captain Marvel, and Thor). The only ones that Survived were Star-Lord and Rocket. Rocket went to Knowhere where he became a denizen. Star-Lord went to Earth and Helped find surviving superheroes. He ended up joining the Avengers. He called Rocket, who informed him that a new Gaurdians team had assembled. With rocket as their leader, Nova, Mantis, and Yondu, protect the galaxy from corrupt mutants.

Queen Storm - Storm is the queen of the Mutants. She rules with a iron fist (but not the character Iron Fist) and shows no mercy. She wears weather resistant armor.

Scarlet Witch - Wanda Maximoff is the adopted daughter of Magneto and Storm. She was abandoned in Genosha at a young age. Genosha was the first county Magneto conquered and he adopted her and her brother who were mutants because he liked them. She is the most powerful mutant.

King Magneto - Magneto rules all of Europe, the Americas and all of Asia, except Russia. His castle is in Genosha. He has a hatred of Humans. When he went to kill Professor X, he built a helmet, resembling a crown (symbolizing his superiority over humans), to protect against X's powers.

Dark Phoenix - Formerly Phoenix, she is another powerful mutant. She is one of the founding X-Men. Magneto helped reach her full potential as Dark Phoenix.


Wolverine - Wolverine was another founding X-Men. In 2026 he became fed up with Magnetos violence and set out to create a new Avengers. He was successful. He still wheres the red House of M armor to remind people that there is still good in mutants.

Captain America (Sam Wilson) - (this is an old design i made. He is only in this because i wanted to show him off.) When Steve Rogers was killed by the X-Men he gave his mantle to Falcon. He was the first man to join Wolverine's Avengers.

Vision - Hank Pym was a founding Avenger. He was too old to battle the evil mutants, but he still wanted to help. Before Wanda came out as a mutant, Pym met her on a relief mission after a violent terrorist attack. He saw her as a good person and when he heard she had joined the X-Men, he built Vision to exploit the good in her to win her over to the avengers.

Shang-Chi - Shang-Chi lost his arm in battle. It was replaced (now people will REALLY get him confused with Iron Fist!) with vibranium lined with special chemicals that made it not able to be controlled by Magneto.

Star-Lord - the former leader of the Gaurdians of the Galaxy. When they died him and rocket split up. Star-Lord went to Earth to help stop the X-Men with the avengers. He might have had tragic events, but still has an optimistic spirit, and 80s music.


Rocket - in the battle with Emma Frost, he lost most of his body. He managed to rebuild it. He then set out to make a new team of intergalactic heroes, The Gaurdians.

Which fig is your favorite? 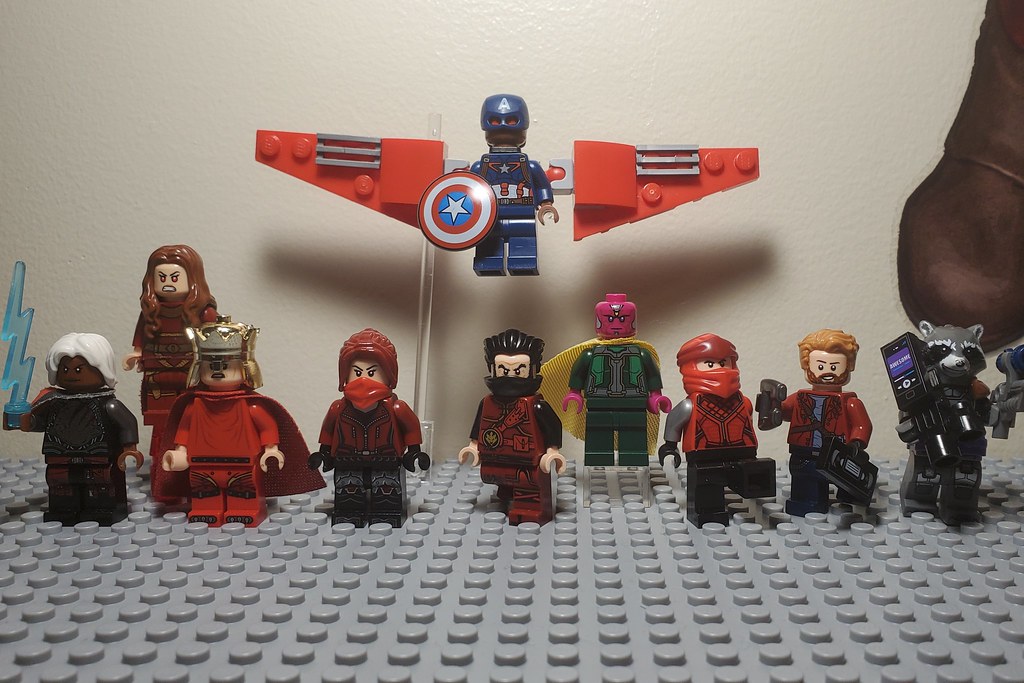 preview: House of M on Flickriver