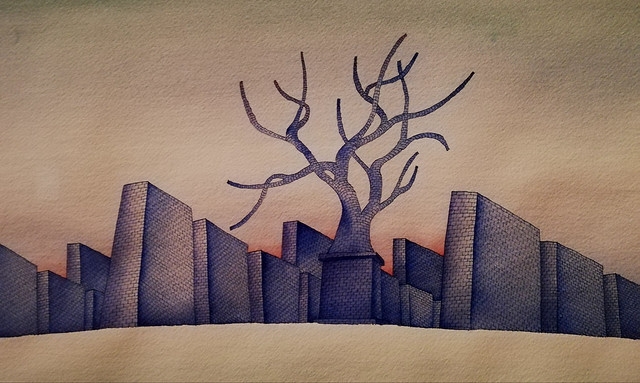 The artistic work of FOLON
Folon was born on 1 March 1934 in Uccle, Brussels, Belgium in 1934. He studied architecture at the Institut Saint-Luc.

Career
The first exhibition of his watercolors was in New York in 1969 in the Lefebre Gallery. One year later he exhibited in Tokyo and in the Il Milione gallery in Milan. He also participated in the XXVth Venice Biennale. In 1973 he joined the selection of Belgian artists in the XXVth São Paulo Biennale, where he was granted the Grand Prize in Painting. Over the years his work concentrated on different techniques, including watercolor, etching, silkscreen, illustrations, mosaics, and stained glass, which showed the diversity of his art. His work Ein Baum stirbt - Un albero muore, 1974, is by Museo Cantonale d’Arte [de] of Lugano. He also designed numerous posters, often for humanitarian causes. Around 1988 he created his first sculptures made out of wood. He then moved on to creating sculptures in clay, plaster, bronze and marble, while continuing to paint.

Several museums dedicated exhibitions to him, among them the Musée des Arts Décoratifs in Paris in 1971, the Museum Boijmans Van Beuningen in Rotterdam in 1976, the Institute of Contemporary Arts in London in 1977, the Musée Picasso in Antibes in 1984, the Museo Correr in Venice in 1986, the Museo de Bellas Artes in Buenos Aires in 1987, the Metropolitan Museum of Art in New York in 1990, La Pedrera in Barcelona in 1993, the Bunkamura in Tokyo in 1995, the Olympic Museum in Lausanne in 1996 and the Museo Morandi [it] in Bologna in 1996–97. In 1999 an exhibition of large sculptures was presented in the Galerie Guy Pieters, in Saint-Paul de Vence. In 2000 he opened the Fondation Folon, which presents the essentials of his work in the region he grew up in. In 2001 the city of Lisbon held a large retrospective of his sculptures in the Castelo de São Jorge, which dominates the city. In 2003 he created the designs for Puccini's La Bohème for the Puccini Festival in Italy. The president of the French Republic, Jacques Chirac, awarded him the Legion of Honour in the Palais d'Elysée. In 2004 he became a UNICEF ambassador. In 2005 the city of Florence held a grand retrospective of his work at the Palazzo Vecchio and the Forte di Belvedere.

He credits Giorgio Soavi for publishing his first posters, which were designed for Olivetti in Milan: "As he has done for many artists, Soavi suggested to me, too, that I invent things that were out of the ordinary for me. This attitude has created such a fertile spirit of invention around him that one wonders if he is not the true author of the works that he has thus encouraged."

Soavi also was largely responsible for the 1975 book Lettres a Giorgio, which reproduces 40 envelopes, each an original watercolor addressed to Soavi—most to his Milan home—and delivered by the mail from various international addresses. Folon writes in a brief Afterword: "We build in our dreams a monument to the unknown postmen to thank them all for having allowed these images to reach their destination."[3]

He created a famous piece of television that was screened in France for almost 30 years. It was first made for the Italiques TV show, by Marc Gilbert (in French), which aired from 1971 to 1974. The music, originally the soundtrack of Gott mit uns, was composed by Ennio Morricone.

In the 1990s, Folon decided to create a foundation in the Solvay Castle, La Hulpe. In 2005, under the direction of Marilena Pasquali, Fabio Mochi organised the exhibition of Jean-Michel Folon in Florence which six years later gave rise to the creation of the permanent Folon exhibition in the Giardino delle Rose (Rose Garden) in Florence. Another piece of television quite famous and remembered is a commercial about methane for SNAM. The soundtrack is Dolorosa by Michel Colombier.

Personal life
Folon settled in the outskirts of Paris in 1955. In 1985, he moved to Monaco.

preview: The artistic work of FOLON on Flickriver