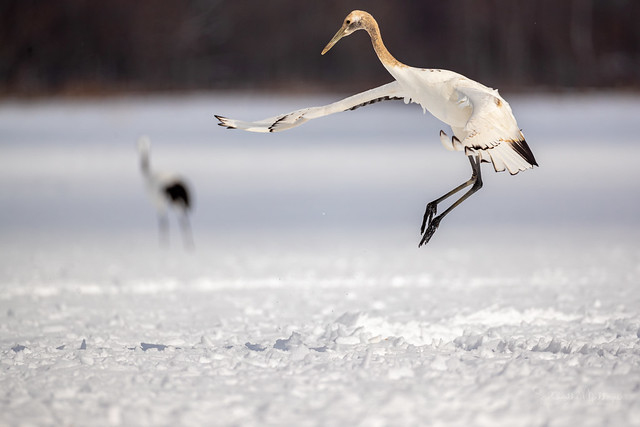 The red-crowned crane (Grus japonensis), also called the Manchurian crane or Japanese crane (Japanese: 丹頂鶴 or タンチョウヅル; rōmaji: tanchōzuru), is a large East Asian crane among the rarest cranes in the world. In some parts of its range, it is known as a symbol of luck, longevity, and fidelity.

Adult red-crowned cranes are named for a patch of red bare skin on the crown, which becomes brighter during mating season. Overall, they are snow white in color with black on the wing secondaries, which can appear almost like a black tail when the birds are standing, but the real tail feathers are actually white. Males are black on the cheeks, throat, and neck, while females are pearly gray in these spots. The bill is olive green to greenish horn, the legs are slate to grayish black, and the iris is dark brown.

This species is among the largest cranes, typically measuring about 150 to 158 cm (4 ft 11 in to 5 ft 2 in) tall and 101.2–150 cm (3 ft 4 in–4 ft 11 in) in length (from bill to tail tip). Across the large wingspan, the red-crowned crane measures 220–250 cm (7 ft 3 in–8 ft 2 in). Typical body weight can range from 4.8 to 10.5 kg (11 to 23 lb), with males being slightly larger and heavier than females and weight ranging higher just prior to migration. On average, it is the heaviest crane species, although both the sarus and wattled crane can grow taller and exceed this species in linear measurements. On average, adult males from Hokkaidō weighed around 8.2 kg (18 lb) and adult females there averaged around 7.3 kg (16 lb), while a Russian study found males averaged 10 kg (22 lb) and females averaged 8.6 kg (19 lb); in some cases, females could outweigh their mates despite the males' slightly larger average body weight. Another study found the average weight of the species to be 8.9 kg (20 lb).

In the spring and summer, the migratory populations of the red-crowned crane breed in Siberia (eastern Russia), north-eastern China and occasionally in north-eastern Mongolia (i.e., Mongol Daguur Strictly Protected Area). The breeding range centers in Lake Khanka, on the border of China and Russia. Normally, the crane lays two eggs, with only one surviving. Later, in the fall, they migrate in flocks to the Korean Peninsula and east-central China to spend the winter. Vagrants have also been recorded in Taiwan. In addition to the migratory populations, a resident population is found in eastern Hokkaidō in Japan. This species nests in wetlands and rivers. In the wintering range, their habitat is comprised mainly by paddy fields, grassy tidal flats, and mudflats. In the flats, the birds feed on aquatic invertebrates and, in cold, snowy conditions, the birds switch to mainly living on rice gleanings from the paddy fields.

The population of red-crowned cranes in Japan is mostly non-migratory, with the race in Hokkaidō moving only 150 km (93 mi) to its wintering grounds. Only the mainland population experiences a long-distance migration. They leave their wintering grounds in spring by February and are established on territories by April. In fall, they leave their breeding territories in October and November, with the migration fully over by mid-December.

A red-crowned crane pair duets in various situations, helping to establish formation and maintenance of the pair bond, as well as territorial advertisement and agonistic signaling. The pair moves rhythmically until they are standing close, throwing their heads back and letting out a fluting call in unison, often triggering other pairs to start duetting, as well. As it is occurs year around, the social implications of dancing are complex in meaning. However, dancing behavior is generally thought to show excitement in the species. To strengthen the bond, red-crowned cranes engage in dual honking rituals before performing a dance.

The estimated total population of the species is only 2,750 in the wild, including about 1,000 birds in the resident Japanese population. Of the migratory populations, about 1,000 winter in China (mainly at the Yellow River delta and Yancheng Coastal Wetlands), and the remaining winter in Korea. It received endangered status on June 2, 1970.

In Japan, this crane is known as the tanchōzuru and is said to live for 1,000 years. A pair of red-crowned cranes was used in the design for the Series D 1000-yen note (reverse side). In the Ainu language, the red-crowned crane is known as sarurun kamuy or "marsh-kamuy". At Tsurui, they are one of the 100 Soundscapes of Japan. Cranes are said to grant favours in return for acts of sacrifice, as in Tsuru no Ongaeshi ("crane's return of a favor").