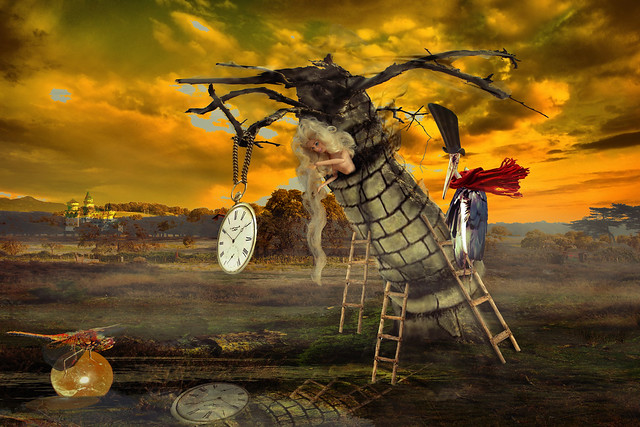 Rabarbiepunzel
Bases on the fairytale 'Raponsje' (Rapunzel) collected by the brothers Grimm.

"Rapunzel, rapunzel let down your hair, so I may climb the golden stair."

A lonely couple, who want a child, live next to a walled garden belonging to a witch. The wife, experiencing the cravings associated with the arrival of her long-awaited pregnancy, notices a rapunzel plant (or, in some versions of the story, rampion), growing in the garden and longs for it, desperate to the point of death.
One night, her husband breaks into the garden to gather some for her; on a second night, as he scales the wall to return home, an evil witch named Dame Gothel catches him and accuses him of theft. He begs for mercy, and she agrees to be lenient, on condition that the then-unborn child be given to her at birth. Desperate, he agrees.

When the baby is born, Dame Gothel takes her to raise as her own, and names her Rapunzel, after the plant her mother craved. She grows up to be the most beautiful child in the world with long golden hair. When she reaches her twelfth year, Dame Gothel shuts her away in a tower in the middle of the woods, with neither stairs nor a door, and only one room and one window. When she visits her, she stands beneath the tower and calls out:

"Rapunzel, Rapunzel, let down your hair, so that I may climb the golden stair".

Upon hearing these words, Rapunzel would wrap her long, fair hair around a hook beside the window, dropping it down to Dame Gothel, who would then climb up the hair to Rapunzel's tower room.

One day, a prince rides through the forest and hears Rapunzel singing from the tower. Entranced by her ethereal voice, he searches for her and discovers the tower, but is naturally unable to enter. He returns often, listening to her beautiful singing, and one day sees Dame Gothel visit, and thus learns how to gain access to Rapunzel. When Dame Gothel has gone, he bids Rapunzel let her hair down. When she does so, he climbs up, makes her acquaintance, and eventually asks her to marry him. She agrees.

Together they plan a means of escape, wherein he will come each night (thus avoiding the Dame Gothel who visits her by day), and bring Rapunzel a piece of silk, which she will gradually weave into a ladder. Before the plan can come to fruition, however, she foolishly gives the prince away. In the first edition of Grimm's Fairy Tales, she innocently says that her dress is getting tight around her waist (indicating pregnancy); in the second edition, she asks Dame Gothel (in a moment of forgetfulness) why it is easier for her to draw up the prince than her. In anger, she cuts off Rapunzel's hair and casts her out into the wilderness to fend for herself.

When the prince calls that night, Dame Gothel lets the severed hair down to haul him up. To his horror, he finds himself staring at her instead of Rapunzel, who is nowhere to be found. When she tells him in anger that he will never see Rapunzel again, he leaps from the tower in despair and is blinded by the thorns below. In another version, she pushes him and he falls on the thorns, thus becoming blind.

For months, he wanders through the wastelands of the country and eventually comes to the wilderness where Rapunzel now lives with the twins she has given birth to, a boy and a girl. One day, as she sings while fetching water, he hears her voice again, and they are reunited. When they fall into each other's arms, her tears immediately restore his sight. He leads her and their children to his kingdom, where they live happily ever after.